Governor’s Cup (Saratov)
There is a very interesting tournament taking place between October 7 and  October 20th, with plenty of ‘fighting’ GMs.Ponomariov, Morozevich, Leko, Vitiugov, Moiseenko, Shirov, Tomashevsky, Andreikin, Eljanov, Ni Hua, Roiz and Alekseev play.  Of the chess that I have seen so far (only 2 rounds have taken place) this tournament  makes the Grand Slam pale in comparison.  I suggest the readers take a peek.  Official website 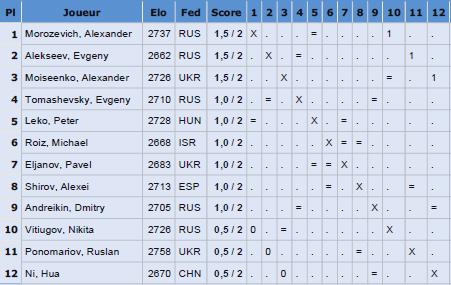 Morozevich always attracts attention when he is playing.  Probably because when he is in form then he is the best player in the world, and the reverse:  when he is playing badly, he plays VERY badly!  He really crushed Vitiugov’s French Defence, almost making it seem that Black was never really in the game!
gm  VITIUGOV

Black had experimented with 8…b6 , a move that Carlsen had beaten Ivanchuk with in the Grand Slam last week.  Obviously Morozevich had seen the game, and he emerged from the opening with a promising position.  In the position above, Morozevich busted open the centre with the surprisingly strong  16.c4! and soon Black found himself having to give up a pawn inorder to get some play…
After 29 moves the game had reached an ending, with Morozevich still a pawn up.

Sadler wins Oslo International Open with 8/9!
Former English chess prodigy Mathew Sadler walked away with the first prize at the strong Oslo event.  His 8 points from 9 games will no doubt go far to improve his elo and establish him as a sort of come-back kid after his retirement from competitive chess to dedicate himself to another profession about a decade ago.  Sadler’s games were hard fought affairs where his will-power often was the deciding factor.  I especially liked his win over GM  Mikhalevsky, which featured the rarely played Stonewall variation of the Dutch Defence.  The englishman surprisingly quickly got the upper hand with just simple moves…