Tidbits from the French Championship 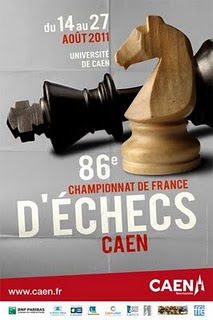 This year’s French Championship boasted 8 of France’s  top-10 FIDE rated players and proved to be a very successful event.  There was criticism about the number of colourless draws and the lower than expected level of play (too many blunders!), but we must remember that– as spectators — we pay nothing for the right to be included in the peanut gallery and our opinions are  (in general) not welcome!

Especially exciting was the final round cliff-hanger between former child prodigies Etienne Bacrot and Vachier-Lagrave.  The title was decided in this game…

GM  Bacrot
Bacrot out-played his younger rival right from the opening stage and in the position above it seems as though White is well on his way to winning the game and with it the title of Champion of France.   White has a pleasant choice of effective ways to proceed; amongst them  26.a4!  a6  27.Bf4  Nc6  28.Qb2! followed by advancing the Queenside majority.  Black is powerless to stop it.
INSTEAD,  Bacrot hallucinated and thought that he could do without  preparation, giving the young Vachier-Lagrave a miraculous opportunity to save the game –and win the Championship!!
26. b5 ?  Bxb5  27. Qxe4 (Bacrot’s idea)  27…Nd3!

A fantastic concept!  Taking the Knight gets mated quickly after …Re2-ch.   White has no choice but to take the Bishop as otherwise the Black f-pawn will advance and become a monster…infact, one gets the  impression that Bacrot is even a bit lucky that he can still hold the game!
30. RxB  Ng4!  Threatening mate   31. Rb1  Re2!

The Rook, Knight and Pawn  guarantee the draw!  Black is threatening a variety of perpetual checks –and if White misplays–even a mate or two!  Bacrot wisely decides to take the perpetual check starting with 32. Qd8-ch Rf8  33.Qd5-ch  etc.  With this exciting turn around, the French title switched hands!

Etienne Bacrot played the best chess of the championship, in my opinion.  Here is his game against GM Edouard, where he demonstrates  his ability to play sharp and uncompromising chess when the position demands it. 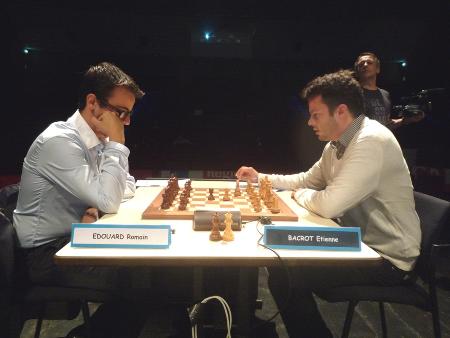 GM   Bacrot
A classical Queens Gambit Accepted (QGA) opening has lead to a sharp position where White has quickly mobilized his pieces while Black has been doing the same behind White’s isolated Q-Pawn.  Black’s last move (17…h6 ?!) , however, is a bit unconventional–not to say provocative — and leads to an immediate crisis in the centre.  Bacrot lashes out:
18.Bxh6!  gxh6

The opening of the Black King position is well worth the cost of the Bishop.  Moreover, subsequent analysis has shown that White is not in anyway risking anything.

This move envisages a possible direct attack against he Black King (Rg3), while maintaining the d5-pawn break in the air.  Play proceeded:

ENDGAME TECHNIQUE?!
It has to be admitted that the time control (40 moves in 1hour,30 minutes; followed by 30 minutes for the rest of the game–plus 30 seconds per move from move 1 onwards) does not allow for demonstrating brilliant endgame technique, but still it is hard to believe that an experienced Grandmaster like Dorfman could lose the position below!