INDIA WORLD CHAMPIONSHIP MATCH IN DOUBT !?
As  I wrote on April 10 here on this blog, FIDE awarding India the right to organize the Carlsen vs Anand match was not  made within the established rules and procedures for such an important event.  The Carlsen team have now refused to accept this decision and , should FIDE not review Kirsan’s decision, the match might not take place at all this year.

Espen Adgestein, the manager of Carlsen, spoke with CHESS VIBES  the other day and has made his position (and that, no doubt, of Carlsen himself) very clear.  He expects a proper bidding process to be put into place.
Once more Kirsan has put his foot into his mouth and the Indian organizers might be the ones to pay the price.  Apparently Kirsan had made a private promise to them before the Gelfand vs Anand match that they would be able to organize the 2013 match, and earlier last month he made good on this, without consulting either with Carlsen or the FIDE rules!

The ex-world champion won by a clear margin the Zug GRAND PRIX .  Congratulations!  The American Nakamura finished in 2nd place… 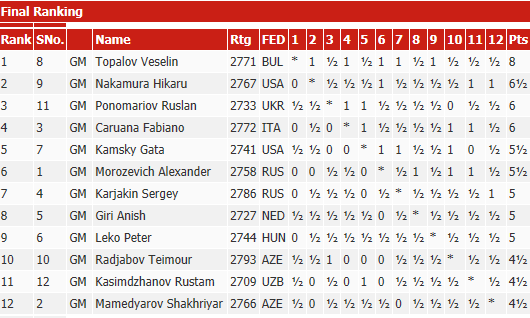 It is good to see Topalov back in the driver’s seat!  Since his match with Anand several years ago, his play had lost some of its sparkle.  The Switzerland tournament shows clearly that the Bulgarian is once more serious about his chess and is a strong contender for the next world championship cycle.
While not playing great chess, Topalov’s fighting spirit was sufficient to dominate the elite field.  I was surprised that Topalov was not invited to play in the London Candidates that finished a short while ago, as he is clearly one of the top 3 or 4 players  in the world.  The Grand Prix tournament gained him 22 rating points and places him about where he should be in the ELO rankings.
Below is probably Topalov’s most interesting game:

This is no joke!  There is a popular discotheque in Mexico with the name CHESS.  It even has its own FACEBOOK page!  Check it out!

From a tournament in Budapest, 1952.  White has not played the opening with any great precision and Black has no problems at all.  Infact, if he can get in …Bf6 he should be doing great!
Therefore, Benko decided to distract him on the Queenside…he played:
18.Qa7??

As Fischer once said of a move in a similar situation  ”A  clever idea, but unfortunately, here it loses!”
BLACK TO PLAY AND WIN!