Thought for the day 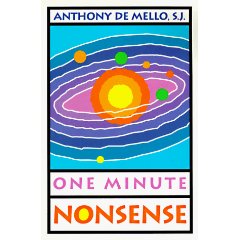 ”The important thing is not to know who “I” is or what “I” is. You’ll never succeed. There are no words for it.
The important thing is to drop the labels.
As the Japanese Zen masters say, “Don’t seek the truth; just drop your opinions.” Drop your theories; don’t seek the truth. Truth isn’t something you search for.
If you stop being opinionated, you would know. Something similar happens here. If you drop your labels, you would know. What do I mean by labels? Every label you can conceive of except perhaps that of human being. I am a human being. Fair enough; doesn’t say very much.
But when you say, “I am successful,” that’s crazy. Success is not part of the “I”. Success is something that comes and goes; it could be here today and gone tomorrow. That’s not “I”.
When you said, “I was a success,” you were in error; you were plunged into darkness. You identified yourself with success. The same thing when you said, “I am a failure, a lawyer, a businessman.”
You know what’s going to happen to you if you identify yourself with these things. You’re going to cling to them, you’re going to be worried that they may fall apart, and that’s where your suffering comes in.
That is what I meant earlier when I said to you, “If you’re suffering, you’re asleep.” Do you want a sign that you’re asleep? Here it is: You’re suffering. Suffering is a sign that you’re out of touch with the truth.
Suffering is given to you that you might open your eyes to the truth, that you might understand that there’s falsehood somewhere, just as physical pain is given to you so you will understand that there is disease or illness somewhere. Suffering points out that there is falsehood somewhere.
Suffering occurs when you clash with reality. When your illusions clash with reality when your falsehoods clash with the truth, then you have suffering.
Otherwise there is no suffering.”
Anthony De Mello
_____________________________________________________

http://www.demello.org/
Anthony de Mello (4 September 1931, Bombay, British India – 2 June 1987, New York, United States) was a Jesuit priest and psychotherapist who became widely known for his books on spirituality. An internationally acclaimed spiritual guide, writer and public speaker, de Mello hosted many spiritual conferences. See below for the names of these programs which are available on audio CD and film. He traveled to many countries to study and later to teach, most notably Spain and the United States. (wiki)
Share