This week’s CHESS IN CANADA !

For the discerning chess player

Every Monday evening a weekly column on the state of chess in Canada is posted , called CHESS IN CANADA! ( or CIC!, pronounced sic) where I discuss those topics that have most interested chess players in Canada during the past week…This is ISSUE no.5
Note: The opinions expressed here , unless stated otherwise, are those of the author and are undoubtedly shared by the vast majority of sensible, rational and decent Canadian chess players.

Photo of the week

The CFC on the road to full recovery? 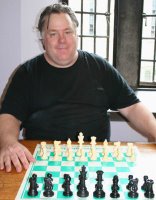 First, let me welcome back CFC President Eric Van Dusen! It seems that his laptop has finally been repaired and he has now returned to online monitoring of chess sites and has even blessed us with some important communiques.

I know we just take it for granted, but it really is swell that the CFC has a president with a laptop that works! This can only improve communication, especially since now it is possible!

Sarcasm aside, Van Dusen is doing a very satisfactory job as prez of the CFC. He has even honoured one of his campaign promises (an electronic newsletter). This past week he has set up several very important committees to deal with perceived problems in the federation.

Notably the Procedures Committee. ”The first order of business is to create an AGM that is done electronically and eliminate the costly face-to-face meeting at the Canada Open. Such a townhall meeting would lay the groundwork for the elimination of proxies.” Van Dusen

While I have some reservations about the eventual effectiveness of this effort, I do see some consistent logic here: after selling the CFC condo, ridding itself of its book and equipment business and the elimination of the CFC magazine…it seems only natural that now it is the turn of both the Annual General Meeting and proxies to go!

I mean, it only makes perfect sense that we should have a chess federation that has no known address and also never meets face to face!

Another committee that has been chaired is the Fund Raising Committee. ”Currently, the Committee is chaired by Amanda Benggawan. Gary Gladstone has already volunteered. I would like to have cross-country representation. If you are interested on being on this committee, please contact the myself or the office.”

Certainly this committee is no laughing matter, but given the near total degradation of the CFC in the last year or so (not only in terms of both operations and services offered, but in terms of internet presence) I find it hard to believe that the CFC has anything at present to offer to potential sponsors and those interested in donating money to a good cause.

The CFC’s well of good will has dried up quite a while ago. Decisions taken by successive Executives are either unilaterally decreed with no discussion or input from governors or are plainly unconstitutional. And even then such decisions are not always communicated to the membership in timely fashion.

It seems to me that it is too early for Van Dusen’s CFC to expect the membership to be impressed. First it necessary to show results. Talk is cheap. The CFC’s reputation up to now is not as sweet and honey as the Prez likes to fool himself into thinking it is…

On a rather amusing vein, Prez Van Dusen has expressed some concern about the communication of members of the CFC on websites that have nothing to do with the CFC or are not any of the CFC’s business. ”It is my opinion that the CFC needs to have a policy on public posting.” Van Dusen , who then goes on a bit further on…”Much of what passes for comment on public boards brings the Chess Federation of Canada and chess in Canada into disrepute.”

Not wanting to regurgitate what I have just written (above), I am certain that the vast majority of CFC members would think that up until recently the CFC does a pretty good job of bringing itself into disrepute, and does not need any help from disgruntled CFC members expressing their frustrations on private websites to change that perception!

It was only two weeks ago that I wrote the following on my blog:

”Chesstalk has recently shown signs of returning to the cesspool that it was just a few short years ago. Then there was open racism, anti-semitism and bigotry. Hooligan behaviour: often anonymous, in groups, vicious and destructive. Intimidation. Abuse. Offensive behaviour. Day after day,week after week, month after month.
People became attracted to chesstalk because they could get away with virtually any type of ugly, gratuitous personal attack that should not be allowed on any properly moderated site.

Today we readily recognize this kind of behaviour for what it is: cyber-bullying; cyber-stalking. A clique prevails on chesstalk that has chased away all those whose opinions differ from those of Larry Bevand. Or is directed towards those considered hostile to Larry Bevand or critical of his predatory behaviour in Canadian chess these past 10 years or so since he publically declared war on organized chess. ”

In the 2 weeks since this appeared on my blog, I have been subjected to more than 50 ugly, destructive and unprovoked personal attacks on chesstalk. The problem is not one of issues, but instead is one of moderation: CMA executive director Larry Bevand allows and openly encourages attacking and stalking against those who are critical of his behaviour.

This past week numerous complaints and criticisms of this chesstalk behaviour have appeared. When I took a look today at chesstalk, I have noticed that things have calmed down considerably. Let us hope that Mr. Bevand has come to his senses and continues to try to improve how chesstalk functions.