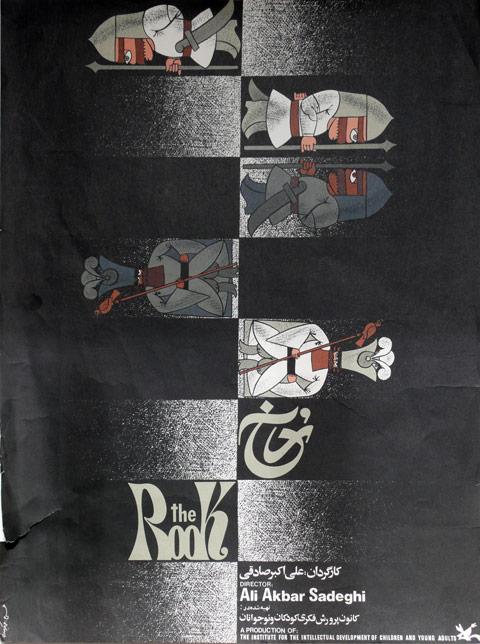 This short film/animation by the celebrated Iranian artist Ali Akbar Sadeghi first came to my attention when I visited the wonderfully creative blog ‘ARTEDREZ‘, which contains all sort of interesting items connected directly and indirectly to chess. I strongly recommend the  reader to investigate this site, I have no doubt that your curiosity will be rewarded! 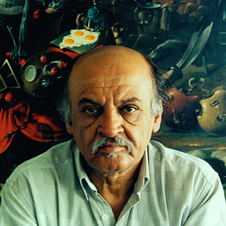 Ali Akbar Sadeghi was born in Tehran in 1937

Renowned painter and filmmaker Ali Akbar Sadeghi’s The Rook (1974) is a hilarious short animation based on a quick little game of chess. The idea of bringing the game to life, in itself, isn’t a terribly novel thing. Many people, like me, would have wondered how a film based on chess would pan out, given the inherent capacity for not only sadism and spectacle, but even analysis of class, war and bipolar politics. (Kubrick’s chess movie is probably the closest one comes to witnessing such a treatment). Sadeghi, given that he was working for the Kanun, undermines the scope for gratuitous violence throughout, instead opting for a Lego-like version of the war. The result is nearly as hysterical as Pudovkin’s and Shpikovsky’s brilliant comedy  Chess Fever (1925). Sadeghi’s style of animation (that seems to have died out now and which one used to see so often in government sponsored animation programmes in India) generally consists of two planes of action, which appear as if they are sliding one beneath the other, and involves hand-drawn sketches animated to puppet-like gestures marked by repetition and rigidity. And the director uses this rigidity to great effect in The Rook. The kamikaze match (which actually sticks religiously to the rules of the game), right till its recursive, anti-climactic showdown is full of absurdities, not only in the way each move is presented, but also in the playing strategy itself. I don’t know if I should understand it as a remark on the absurdity of war or on the absurdity of the game, but Sadeghi sure harnesses the absurdity of the medium to its fullest here.

The Rook received the following recognition: