The following game was played in Gibraltar just the other day and features a quick blow-out between two top notch European grandmasters, England’s Mickey Adams and Estonia’s Jan Ehlvest.
When I first played over this game, which lasted barely 20 moves, it came to my mind that the rest of the game score was probably lost in transmission, but infact Ehlvest resigned  and his position fully justified his decision not to play on!  As the reader can readily verify…
The reader might not be aware of it, but Ehlvest’s choice of opening –namely a fianchetto against a Spanish opening–has been successfully played in the past by world champions, namely Steinitz and Spassky.  In the search for new winning tries with the Black pieces, many creative players have been attracted to the fianchetto line.  Even today…
In particular, I remember a brilliant victory by Spassky (with the Black pieces) over Timman in 1983 in Linares.  ( game here )  I was so impressed with this game that I later tried the same scheme against Timman at the Taxco Interzonal (game here ), and though the game was only drawn I stood much better at one point!

Black hopes to complete his development quickly and put pressure on the e-pawn with Re8, a strategy borrowed from the Kings Indian.  Often the b-file is opened when White exchanges on c6, and this just increases Black’s activity.  ( As in the Timman vs Spassky game mentioned above, as well as in my own game with Timman.)  Throw in White’s queenside castling as bonus, and you begin to wonder if chess is really a difficult game!
HOWEVER, Mickey Adams does not often castle queenside and he demonstrated the flaws in Black’s setup as he played more positionally , first castling kingside and then playing Bh6, exchanging Ehlvest’s important King Bishop.

Curiously, I stopped playing this setup with the Black pieces after my Timman game precisely because of this exact strategy.  Infact, it was Timman–in our postmortem analysis–who himself pointed out this possibility.  I remember asking him why he did not do this during the game, but he wanted ”more” from the position.
And this is where Adams differs from most grandmasters: he is quite satisfied with a small–even microscopic– but durable positional advantage.  His style has demonstrated its effectiveness by defeating virtually every single strong grandmaster in the world at one time or the other…!
After 16 moves Black seemed to have a slightly inferior but solid position:

Now the Black King is open to a diagonal check and the e-file will only bring bad news to him…
Adams won in just another two moves when Ehlvest, probably depressed with his opening experiment, made a serious mistake (19…Ng8?) and resigned the next move. 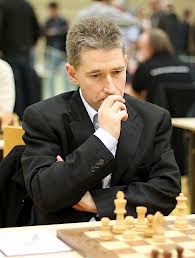 Michael Adams is one of England’s very best grandmasters ever.
Share