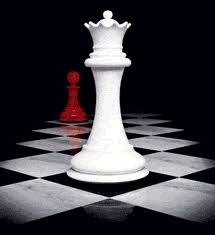 Yesterday’s games on the Poison Pawn involved Queen sacrifices where it was evident that the compensation was a very strong attack on the King.  Today’s game is an example of a more subtle variation on the theme:  White sacrifices his Queen for purely positional considerations.  This is a more elegant sacrifice and occurs , understandably, much less often.
The game was played this past weekend in Barcelona in the 2nd round of this season’s Catalunya Team Championship.

Round 2 of the Catalunya Team Championship this past weekend.  It was a very cold weekend!  I am in the centre (blue sweater).  Viktor Moskalenko is playing next to me (his opponent is the Columbian gm Jaime Cuartas)  Our team defeated Montcada 6.5-3.5  This photo shows Moskalenko pondering over the move 19.Bxg7!!
POSITION AFTER WHITE’S 17th MOVE (17.Qd4!)
GM  J.Cuartas

GM  V.Moskalenko
White has an evident advantage in the form of 2 Bishops and several nasty pins.  The doubled pawn on g4 is of little consquence; the more so because the f-file brings even stronger pressure onto the Black position.
Here White expected the tough 17… Qb6  when after18. Qxb6! ab White can simplify to an advantageous Rook ending with 19. Bxf6 Rxf6 20. Bxd5 Rxf1 21. Kxf1 cd 22. a3!?.  Black may not be lost, but he would certainly  have a difficult defence ahead of him…
INSTEAD, BLACK THOUGHT HE SAW A LESS PAINFUL SOLUTION:
17… Qe8?!

Had Cuartas seen Moskalenko’s 19th move he would have no doubt gone into the Rook ending. But we can not blame him for overlooking this…
18. Bxf6! Re4!?

The second ‘!’ is for  elegance of concept!  White gets Rook, Pawn and Bishop in return for the Queen, but more importantly, the Black Kingside will have been weakened due to the disappearance of the g-pawn.  Moskalenko needed to see deeply into the position that he could indeed make this factor a decisive influence on the outcome.
19…Rxd4 20. Bxd4

It turns out that White’s coming Rf5 (!) can not be stopped for very long.  Should Black now play 20…b6 then 21.Rf5 would have been the response.
Cuartas tries to glue together his positon:

With  very subtle finesses, Moskalenko has found the right path for the Rook to infiltrate the Black Kingside.  There is now no defence and the game soon ended.
You can download the game in pgn with Moskalenko’s original annotations here
[Event “Equipos”]
[Site “?”]
[Date “2012”]
[Round “2”]
[White “Moskalenko, Viktor”]
[Black “Cuartas, Jaime A”]
[Result “1-0”] 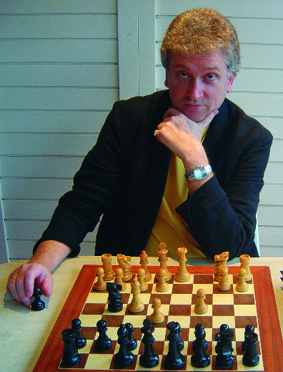 Viktor Moskalenko is a very strong Grandmaster who lives in Barcelona and plays for the same  strong team  as I in the championship of Catalunya.  Viktor has an aggressive style of play and has played many great and memorable games.  He is also a well known chess author.  I have all of his books!
Chessbase  writes : ”Born in 1960, is a grandmaster from Odessa (Ukraine) but who now lives in Spain. He was champion of Ukraine in 1987 and of Catalonia in 2001, 2005 and 2007. In his surveys he introduces us to his interesting repertoire, which is partially composed of sidelines which offer lots of possibilities for success. Moskalenko lives in Barcelona where he works as a trainer. He is also a successful author of chess books like The Fabulous Budapest Gambit, The Flexible French, Revolutionize Your Chess and The Wonderful Winawer.” 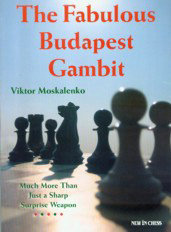 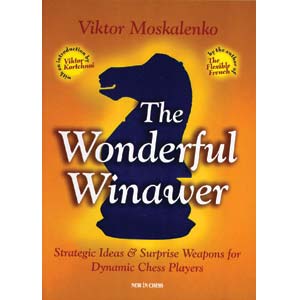