The myth of logic and reason in chess…. It has been several weeks now since FIDE’s colourful  president –Kirsan Ilyumzhinov– went to visit Col.Gadaffi.  The two men even had a pleasant game of chess for the cameras. Most of the media in Europe and America mercilessly ridiculed Ilyumzhinov and condemned his visit to a country with such a poor record on human rights and the complete absence of democratic principles.  Not to mention that Libya has also been bombed night after night by NATO for the past month or so…and indeed did so while Kirsan was present! 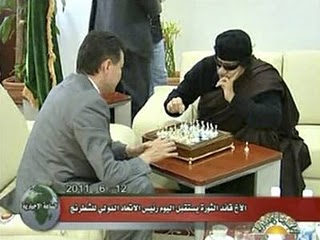 In the chess world many also were quick to condemn Kirsan’s latest photo-opportunity with another world leader.  Indignation and outrage are the key words here.  First the English Chess Federation and then the French Chess Federation voiced their disapproval:

Closer to home, many expressed similar indignation and outrage on the message boards in Canada:  link
”Canadian chess players cannot fire the FIDE president – we can only withdraw from FIDE. If I was CFC president, that’s what I would do…”  Vlad Dobrich, Toronto organizer


”The current FIDE president’s actions and statements, in and out of FIDE, are consistently on the edge and form a pattern. This is not just one isolated action where he happens to be out of step with Canadian norms. I see no reason why one cannot look at the whole picture and conclude that he is unsuitable for FIDE presidency.” Roger Patterson, Victoria organizer


”Kirsan’s visit to Libya is indeed offensive and it would be quite appropriate for the CFC to issue a statement of condemnation for publication by ChessBase, etc. That said, I would not get too carried away with our self-importance. We have long known that Kirsan is a crackpot …” Gordon Ritchie, Ottawa organizer
____________________________________________
A WEEK LATER KIRSAN VISITED VIETNAM

The FIDE president played a game of chess with the country’s political leader. Vietnam –also like Libya– lacks democracy but has an even worse human rights record since 1975, when the Americans finally withdrew the last of its military presence.


The European and American media did not even mention the visit. No one in the chess world condemned Kirsan’s latest photo-opportunity with a world leader. Needless to say, indignation and outrage was the last thing on anyones mind…neither the English Chess Federation nor the French Chess Federation protested.

Closer to home, in Canada, not a peep from Vlad Dobrich, Roger Patterson or Gordon Ritchie…

The chess world was silent. What does that say about us? Doesn’t make us look very logical and reasonable, does it?

On one of my favourite blogs in the english language there appeared yesterday a brilliant analysis on this precise reaction in the chess world to Kirsan’s visits entitled ”You’ve gadaffi joking”   LINK
”No-one said a word.  Whatever.

Anyway, I wrote a piece about Kirsan’s visit to Libya at the time, which I was going to run on Wednesday last week. And I changed my mind, it being, coincidentally, my birthday that day. Politics and war and dictators seemed far too serious for a birthday, so I dropped it, substituted something harmless and went up to the mountains for the day. But it’s been nagging at me that there was something I wanted to say. So I’ll try and say it now.


One of my persistent, albeit occasional, themes in writing about chess politics and media is the difficulty which the chess world, in Western Europe and North America, has in understanding the point of view of the rest of the world. The reason being, chiefly, that it does not try.”

The author then goes on and  describes the prevalent political bias in the non-3rd world  chess community and its fundamental contradictions that it prefers to ignore. You have to read the whole article!  It blew me away. There is , indeed, reason and logic in the chess community, albeit in difficult to find places.