The evolution of chess match strategies

”Winning is the not the most important thing, it is the ONLY thing!”
–Vince Lombardi

Who said that chess is fun? The marathon 21st game of the 1843 Staunton vs St. Amant  match (depicted above)  lasted 66 moves and took 14 and a half hours!  A record, even in those times before the use of chess clocks! (The average game lasted slightly more than 9 hours, if we are to believe the historians.)  While the loser was thoroughly exhausted in the final hours, it was considered to be perfectly gentlemanly — hence  fair play– to fatigue and wear out the opponent.
All  of this is clearly about the psychology of winning applied to the game of chess:  psyching out the opponent; out-sitting him in an effort to get him to become impatient or to provoke him to make a rash decision, wearing him down, and so on.   Chess history records the strong Spanish master Ruy Lopez in 1561 advising his students  to place the board so that  the sun would be in the eyes of his opponent.  And Lopez was a priest, so we must measure his ethics carefully!
The game of chess has always been about winning and out-witting your opponent–on the board or  off of it.  Technology may have introduced chess clocks and artificial lighting (and hence eliminated some of these earlier off-board strategems) but the infinitely creative mind of some chess players has not desisted in seeking new paths  to get some sort of a competitive edge… 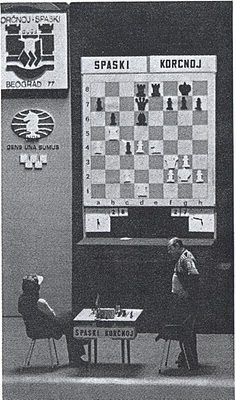 The 1978 Candidates Final match between Spassky and Korchnoi witnessed Spassky (who was trailing the match by a big score) engage in circus-like behaviour, often provoking laughter from the audience of some 2,000.  More than once Spassky showed up for the game with a large silver visor that one often sees in poker games.  In addition, while Spassky preferred to study the demonstration board (instead of the normal board) Korchnoi started to lose his patience and spent little time at the board.  The result: Korchnoi lost 4 games in a row before he could re-establish his winning ways!

I think that the general public implicitly accepts a certain element of modified behaviour on the part of one or both players in any important chess encounter, provided it is done in good faith and within established sporting norms.  Perhaps the public even anticipates and secretly hopes for such  colourful antics: merely pushing pieces around the board rarely excites a crowd or attracts the media…

The Kazan Candidates Matches (May 4-26) is probably the most important chess meet this year.  The winner of this knock-out competition between 8 of the very elite of world chess will go on to challenge Anand for the title of World Champion sometime next year, with several millions of dollars in prize money at stake.
In recent years FIDE had failed to establish a system for determining the challenger in a manner that has satisfied everyone– especially those who consider themselves the most worthy– and  even the Kazan meet was embroiled in controversy months before it even began!  Magnus Carlsen, the Norwegian boywonder of the chess world , shocked  his colleagues and the chess world when he suddenly withdrew:

”After careful consideration I have reached the conclusion that the ongoing 2008 – 2012 cycle does not represent a system, sufficiently modern and fair, to provide the motivation I need to go through a lengthy process of preparations and matches and, to perform at my best.

Reigning champion privileges, the long (5 yr) span of the cycle, changes made during the cycle resulting in a new format (Candidates) that no World Champion has had to go through since Kasparov, puzzling ranking criteria as well as the shallow ceaseless match-after-match concept are all less than satisfactory in my opinion”


Neither was Carlsen  pleased with  the format ( knock-out mini-matches at regulation time controls  followed by play-offs (if necessary) at rapid and blitz time controls) or the schedule, which only allows 5 rest days in the entire event! 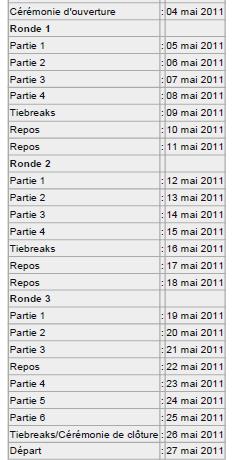 In essence, the ultimate winner of the Candidates would be playing non-stop for the better part of a month!

A good question is how a serious contender should approach such a gruelling championship, and especially if it would not be a wise thing to change one’s normal approach to competitions.  Other questions are of no less importance: energy,  match preparation and strategy, health and diet, and psychology need to be addressed.  Success rarely goes to the one who plays the best chess in such circumstances, but rather to the one who most successfully adapts to the difficulties that arise along the way…. 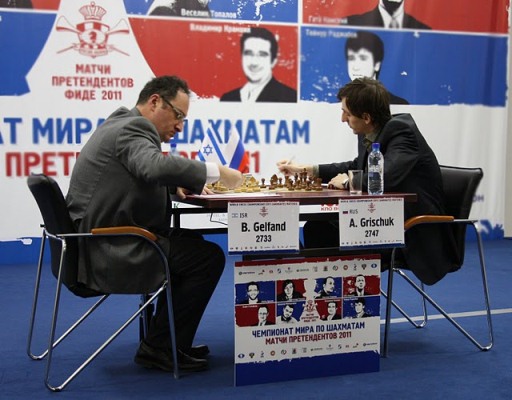 As we know, the 2-finalists are surprises for the majority of chess pundits:  Israel’s Boris Gelfand (age 42–the oldest participant in Kazan) and  Russia’s Alexander Grischuk (age 27), the current champion of Russia.  In particular, both players do not fit the flashy stereotypes that  champions like Kasparov or Carlsen represent; infact, both Gelfand and Grischuk seem to lead perfectly normal lives far away from scandal and the media!
No doubt the early exit of the chess-public’s  favourites Lev Aronian (Armenia) , Vlad Kramnik (Russia) and V. Topalov (Bulgaria) has been a bitter pill for the Kazan organizers to swallow, but the lack of decisive games (this should not be mistaken for lack of hard fought games, however) in the regulation time controls has attracted the wrath of a small, but vocal, segment of the online chess community.

In particular, the Russian superstar Grischuk has been the target of much unfair and mean-spirited criticism by fans.  While not exactly an unknown in the chess world at the top (he has been playing in these top-level knockout events since 2000, even once reaching the semi-finals!), Alexander is considered by most to be an under-dog and also something of an anti-hero.

Nor is Grischuk  outspoken or charismatic, and he does little to attract attention or want to improve his image.  (Alexander is also a world class poker player.)  Perhaps most prejudicial to his cause: Grischuk was the last-minute replacement for Magnus Carlsen when he withdrew!  And when he successively knocked-out Aronian and Kramnik without winning a single regulation-time game, the fans went ballistic…

Grischuk’s critics have been asking if Grischuk will qualify for the World Title match next year without winning a single slow game of chess!

So far the finals match with Gelfand  has been very difficult but all 5 games have ended in draws.  While games 1,2 and 5 were exceptionally hard fought affairs that saw Grischuk let escape winning opportunities, chess fans really criticized both players for the  short strategic draws (under 20 moves each!) in games 3 and 4.  One chessbase report wrote of a GM commentator describing the attitude of both GMs as being ‘disgusting’!

Certainly I have never witnessed such a blatant lack of respect for  great players in my many years as a chess player and fan.  Merely  taking into account  the enormous stress and fatigue that both superstars have been subjected to these past weeks, one would think that any rational fan would just shut up and not say anything negative or hurtful.

PERHAPS THESE FANS WOULD INSTEAD LIKE TO SEE GRISCHUK AND GELFAND PUT ON BOXING GLOVES AND KILL EACH OTHER IN THE RING:

Be that as it may, one should not take  fans seriously, ever.  This is certainly not a boxing match nor is this Fischer vs Spassky (1972) at the height of the Cold War.  This is a chess match–albeit a very important one–but the only thing that really matters is qualifying for the World Championship next year.
As such, I think that Grischuk’s match strategy for the Kazen Candidates is exceptionally intelligent and rational, and not at all well understood by the chess fans out there who are following. In essence, Grischuk studied the rules for this event long before it took place and understood perfectly why Carlsen did not want to take part: too much luck (short matches) and too many rapid and blitz play-offs.

Drawing upon his experience as a poker player, Grischuk decided to treat every game (hand)–regardless of time control–as of equal worth and of the same importance.  He was not going to try harder or take more risks simply because the time control is slower.  If he did not like his position or his chances, he would simply make a draw (throw in his hand).

And because Grischuk is such a great player at faster time controls he has no need to fear the play-offs.  Instead, he looks upon the play-offs with confidence and objectivity.  He does not over-rate his chances, ever, and this been the secret to his phenomenal success so far in Kazen.

The world has changed a lot since the time of Staunton and St. Amant, and in many ways has become more sophisticated and competitive.  Success does not always come by repeating what has worked in the past.  Infact, when the stakes are the highest, only the smartest and brightest can adapt.  And even then, only the cream can come up with new ways to win.