The end of master-level chess in Canada?

FIDE ratings rule the chess world.  Some countries also have their own internal rating systems (USA, Canada,England, etc) but in terms of prestige and accuracy there can be no doubt: only FIDE ratings are taken seriously by players and organizers alike. If a tournament is not FIDE-rated then it is not considered a serious tournament.
FIDE has just released the March rating list. Below are the top 25-male list and top-25 female list for Canada.  Pay special attention to the number of games played in the most recent rating period (”G”). 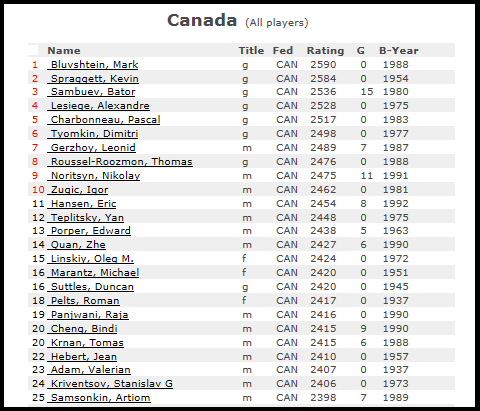 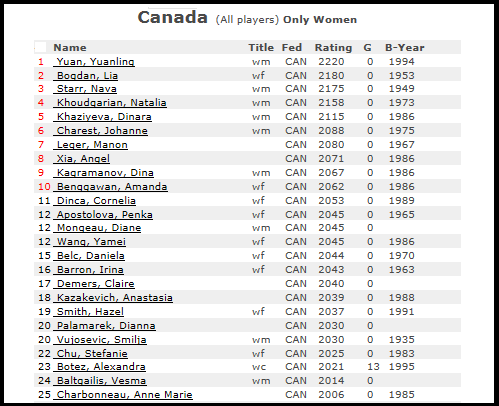 If we start with the top-female list, we can not but notice that NOBODY is playing chess!  And taking a look at the top-male list, we find that while the situation is not quite as dramatic, it is still VERY bad. In particular, only 1 of the 7 Canadian grandmasters has any rated games!
In my own case, the ‘0’ for games played  is not quite accurate, as I have played a number of team-games in various countries but they have not yet been submitted by the respective national federations.  And I usually play between 50 and 100 games per year.  It is just that recently I have been busy with other chess-related activities…
HOWEVER,  the above 2 charts support evidence of a trend  that has established itself in recent years:  ‘Elite’ chess in Canada  is disappearing the way of the dinosaur.  With the exception of Sambuev, none of Canada’s grandmasters participate in any of Canada’s national championships anymore. I have not participated in a Canadian tournament in 8 years.  The same goes for Lesiege. Tyomkin’s case is just a bit better, but no much.  Charbonneau has not played more than a dozen games in all (Canada) in recent years.  Bluvshtein has even retired!
Worse still, there are no REAL  national championships for these grandmasters to play in: the CFC now operates a policy of zero investment in ‘Elite’ chess and ALL of its national championships have become REGIONAL championships with virtually nothing other that local-area particpants.
The same thing goes for the recent Junior Championship held in Calgary: even though only one player from east of Winnipeg participated, the CFC executive called the tournament a great success!
ANYWAY, I have written many times of the complete failure of organized chess in Canada in recent years.  There is an uncontrolled free-fall.  There is little new in the above 2 charts: organized chess in Canada should be ashamed of itself.  The CFC should be ashamed of itself.  Except for the lowly club player, no one else is playing chess in Canada.
SPRAGGETT ON CHESS
Share