The dangers of flying in America today

”The nation was on alert, and on edge, Sunday as it commemorated the 10th anniversary of the Sept. 11, 2001, terrorist attacks. Tensions were heightened by reports that authorities were investigating potential new terrorist threats aimed at disrupting the day of national mourning.”  link
That was one of the reasons I stayed home on Sunday.  That and the fact that I don’t like travelling thru airports anymore: you are treated as a potential threat and have to prove your innocence by humiliating yourself with ridiculous rituals involving taking off one’s shoes, pant belt and what not.  I prefer the train.  Unfortunately, the one that will travel the Atlantic Ocean is still looking for courageous investors…
Here is the story of one brave housewife who regretted leaving home Sunday while looking like the typical American she is and always has been…

Racially profiled housewife terrorized and arrested on 9/11 for flying; she is half-jewish, half-arab, and dark skinned.
Story Link 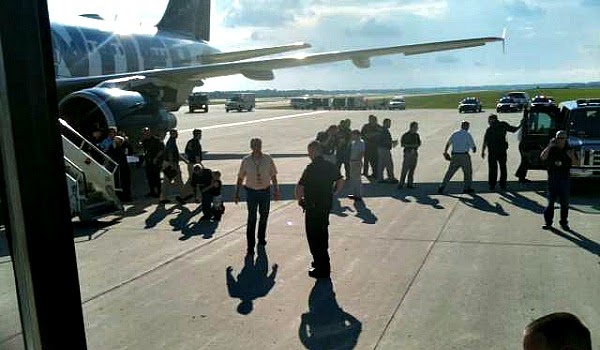 Shoshana Hebshi, who describes herself as a “half-Arab, half-Jewish housewife,” was aggressively cuffed and detained from Frontier Airlines Flight 623, then strip-searched, for the apparent crime of being ambiguously “ethnic”—and being seated next to two Indian guys she didn’t know who got up to use the toilet.
On Sunday, 9/11/2011, Hebshi was held and questioned in a Detroit cell for several hours. A fellow passenger on her flight had told a flight attendant that she and her dark-skinned seatmates (all of whom were strangers to one another) were “suspicious.” One can only presume they were racially profiled.
What makes Hebshi’s tale even more bizarre: she tweeted the ordeal as it unfolded, at first not realizing that she was the suspicious person the “[c]ops in uniform and plainclothes” were after. Snip from her account: 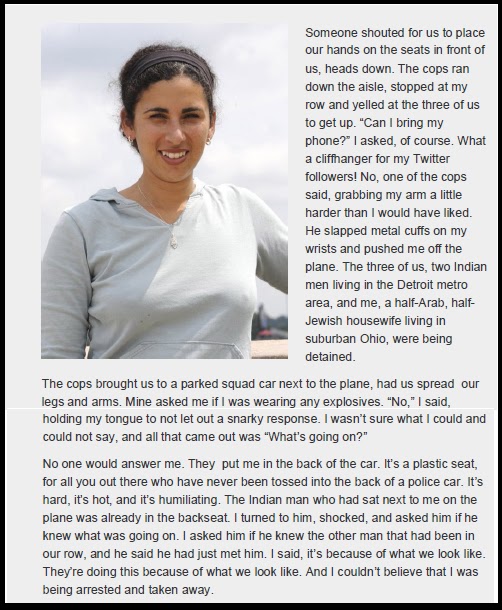 You might be interested in reading more.  Try this link for more of the woman’s account.  And this LA Times  link as well as this link that claims that the 2 indians had been making out in the washroom (!).
SPRAGGETT ON CHESS
Share