The best chess is most often imperfect chess

Well played games are not as common as one might think.  Perfect games either end in mate in less than a dozen moves (against a beginner)  or in boring draws where nothing much happens except exchanging pieces.  So what is left?  Ofcourse: the imperfect games!
Imperfect games are the meat and potatoes of every chessplayer!  By this I mean that imprecisions tend to make the game more interesting because they introduce surprising and unexpected turn of events and sometimes even more imprecise play to follow.
Every grandmaster plays a couple of imprecisions during any given game.  Remember that the just completed Anand vs Topalov match for the world championship saw on average 3 or 4 game changing imprecisions per game!  And that is why the match was so exciting for the spectators!
Below are two games that I think the reader will enjoy.  Both are excellent examples of fighting chess, where both players try to keep their head above water despite their imprecisions.
_________________________________________________________________

Levenfish
Back in the days when this game was played, the theory of the French defence was not anywhere near evolved as it is today.  Today every master knows that the pawn sacrifice on c5 is usually only temporary, as Black can later put a Rook on the c-file and gang up on it.
White should now consider playing 11. Be2 Re8 12. c3  with a comfortable but complicated game.  However, Levenfish did not want to let Black play a later Rc8 and so he closes the c-file immediately.  This leads to sharp and messy play.
11. Bxc6!? bc 12. Qd3!?

White believes that the weakening of his King-side will bring more advantages than disadvantages.  Perhaps now Black should consider playing 12… Qc7!? followed by a5 to harrass the Knight on b3.  In that case he would have reasonable chances, especially given that he has the Bishop pair.  However, Yudovich felt  that he had something to gain by weakening White’s King-side… 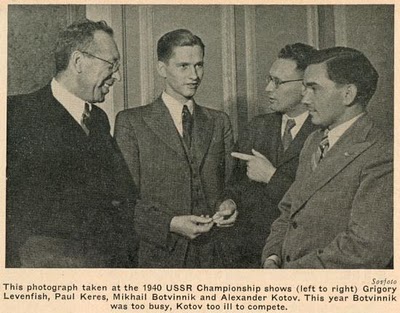 Grigory Levenfish was born in 1889 and died in 1961.  Twice Soviet Champion, he tied a match with Botvinnik in 1937.  Though forgotten today, Levenfish was a world champion-calibre player in his best years.  His style of play was characterized by independent thinking and brilliant and imaginative attacking play.  He defeated all of the top Soviet player of his day, but died in obscurity in 1961.

White has the open g-file for future attacking prospects, and his f-pawn might prove to be an effective battering ram.  The weakened King-side is of little importance at this moment, especially since Black’s forces are not prepared to take advantage of the opening of the King position.
The question for Black now is to decide upon the best place to put his Knight.  Worth of consideration is 14… Nf3!? 15. Kg2 Nh4 16. Kh1 Qc7 17. Rg1 Bf6 with an interesting game, though after  18. f5 Nf3 19. Rg3 Ne5 20. Qa6 White seems to have an initiative.
Black decides upon a plan of action that sees his Knight operate from e6 or c7.  This plan seems more realistic.
14…Qd7 !?  A bit of a tempo gainer, since White must watch out for Black’s threatened …Qg4

White decides to ready his Rook going to g1.  However, this turns out to be a bit of an imprecision since Black’s next move allows him to cement his Knight on e6.  To be considered next time is 16. f5!? Nc7 17. Kh1 Bf6 18. Bd4 followed by putting his Rook on the g-file.  In this case White would maintain the more active positiion.

The position is roughly even now. White’s extra pawn is of little significance given that White is very inflexible.  His Knight must stay on b3 to defend c5, and will be subject to attack with a later …a5.

Black seems to be getting a good game here!  White has no threats whereas the b2-pawn could be a source of future worries.  Black also wants to place a Rook on the b-file and to possibly play …Rb4 increasing the pressure.   For the moment White can not take the f5 pawn since the Bishop will move with a double attack.
This is a very important moment in the game.  White must decide on how he is to play the middlegame:  passively defend the threats along the b-file or to try to gain some initiative.  Levenfish decides on the latter.
19. Rad1!?   A very good move.

Levenfish realizes that passive play could be fatal in this position, so he opts for piece activity.  He might double on the g-file or the e-file.  And he might consider using his h-pawn as a battering-ram.  And finally, let us not forget about Black’s a-pawn!  All in all, the position is still about even, but a dynamic fight is developing.  Both sides stand badly!!
Not that Black should not take the b-pawn at this moment:  after 19… Bxb2?!  20. c3! blocks the Bishop’s retreat and will allow White to exploit its absence over on the King-side: 20… Rab8 21. Qc2 Qb7 22. Nd4 Nxd4 23. Bxd4! etc  Finally,  19… Qb7 would fail to 20. Qxf5

An interesting continuation.  Black realizes that he needs his King-Rook on the King-side.  The Black a-pawn is of little importance for the moment.
20. Nxa5  there is nothing better 20… Rxb2 21. Nb3!

As a point of curiosity, White’s truly ugly pawn structure (which looks as though it has been hit by a truck!) deserves to win a prize!  Fortunately for White, his active pieces fully compensate.

Perhaps Yudovich over-estimated his position here.  He must have thought that he could get something going over on the King-side with a later …Qh5.  In anycase, he now gets into a bit of trouble along the e-file.

This pin is awkward and Black must exercise caution.  As we shall see in the game continuation, it was under-estimating White’s potential play along the e-file that does Black in in the end.  If now Black moves his Queen to f7 then White might simply advance his a-pawn to a5.

Black’s Bishop move changes nothing in the position.  Now Black should play his Queen to d7 (24… Qd7! ) with an even game.

Black’s earlier carelessness has brought him to the edge of defeat…almost!  For the moment everything still holds.

26. Bb2   A natural move increasing pressure along the long diagonal, and threatening to take the pawn on g7 in some variations.

For someone with such an ugly pawn structure, his pieces sure do work well together!

INSTEAD, BLACK PLAYS THE NATURAL MOVE AND WALKS RIGHT INTO A TRAP!

Black must have been hoping for 28. Qxf5 Rxf4.  Instead, comes a very unpleasant surprise!

Ouch!!  After this move the Black position collapses like a house of cards.  The funny thing is that Black can take the Rook in 4 different ways—all of them bad!  The game quickly ends in a shoot out.

One of my favourite books is Tal’s remarkable ”The Life and Games of Mikhail Tal”  Originally published in 1976, I remember buying this book during the World Open in New York that same year and then spending the next 6 months devouring every precious game and word of insight by the ex-world champion!

The following game was against the great Yugoslav champion Gligoric (born 1923, and still alive and well today!), and is one of about a dozen or so Spanish games played between the two superstars.  While Tal’s life-time score against Gligoric in this opening was much in his favour, Gligoric managed to defeat Tal twice in two very important encounters!  (The game that follows is not one of them, but is typical of the sharp and complex fights between them.)  This game could be found in Tal’s book.

Tal
Gligoric has not played the opening with the required precision , and as a result he finds himself in a delicate situation.
Tal writes ”It is very difficult for Black to find a satisfactory plan. Therefore Gligoric attempts, at the cost of a pawn, to take play into an ending where he would have quite good drawing chances…naturally White is not satisfied by such a transformation of his big positional advantage, and attempts to exploit his attacking chances in the middlegame. ”

This is a very interesting remark.  Both players, evidently, were under the impression that Black would have had good practical chances to draw the ending.  To me it is not clear why these chances are ‘good’:


I think that Tal simply did not want to play an ending on that given day.  He wanted to win in the middle game, period!  And while we fans can hardly criticize the ‘Magician from Riga’ for his decision, the perfectionist in us must recognize that Tal could have taken the pawn and maintained excellent winning chances.

This kind of  practical decision faces chessplayers from time to time: to play the ‘best’ but boring line, or to play the ‘second best’ but  much more exciting line!  Sometimes the strongest line is not the best line!

I am reminded of a similar example from the game Bobby Fischer vs J. Bolbochan played at the 1962 Stockholm Interzonal.  Here is the position in question:

In this position, after some thought, the American champion played  25.Rc3 and won brilliantly 12 moves later.  He was awarded the Brilliancy Prize for the beautiful finish.  But this is what Fischer wrote about this position:

”Objectively best is  25. Nxe7 Qxe7 26. Rxa6 Rfe8 27. a4! But I was hoping to win in the middlegame. Ironically, I wouldn’t have been awarded the brilliancy prize had I chosenthe best line here. They don’t give medals for endgame technique!”–Bobby Fischer, ”My 60 Memorable Games”  page 215 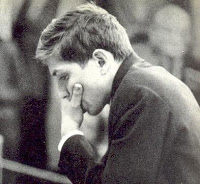 Fischer, at age 18,  won the 1962 Stockholm Interzonal by 2½ points, scoring an undefeated 17½/22. He was the first non-Soviet player to win an Interzonal since FIDE instituted the tournament in 1948. Fischer’s decisive victory made him one of the favorites for the Candidates Tournament in Curaçao, which began soon afterwards.
STOCKHOLM INTERZONAL January 26 to March 8, 1962 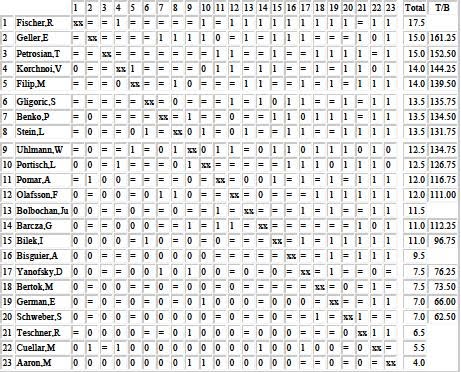 Tal wrote:  ”The pin along the d-file is highly unpleasant for Black,and the counterpin along the e-file cannot compensate for this. Now the threat of 24.e5 is very strong.”

INSTEAD, GLIGORIC ALLOWED TAL TO BUILD UP THREATS:

Moving the Queen closer to the King-side and threatening to win with 26.Nh6

Now Tal is given another chance to transpose into a very advantageous ending: 26. Qxc7 Rxc7 27. ed Rxe1 28. Rxe1 Bxd5 29. Ne7 Bxe7 30. Rxe7 (diagram,right)  Black can not play 31…Kf8 because of 31.Ba3!
White has the Bishop pair (which is very powerful here in the open position with pawns on both sides) and Black has absolutely no counterplay.  I would think that most grandmasters would win this ending with the White pieces 8 times out of 10.

INSTEAD TAL, TRUE TO HIMSELF, WANTS MORE!  HE WANTS TO WIN IN THE MIDDLE-GAME:

Tal writes.”The storm clouds are gathering. All the white pieces are eyeing the enemy king in far from friendly fashion. ”  There is no doubt that Black’s King is under attack, but there is some debate about whether Tal was over-estimating his attacking chances.  In the analysis he wrote for this game, he made a serious oversight.  It is worth taking a closer look:

AND FINALLY, THE BEST PLAY FOR BOTH SIDES IS :

White stands a bit better, mostly because of the majority of pawns on the King-side.  However, Black’s 3 minor pieces should not be underestimated!  Black has excellent practical chances of holding the game.


HOWEVER, INSTEAD OF THIS GLIGORIC IMMEDIATELY BLUNDERED WITH:

This simply loses the exchange and with it the game becomes lost.

And so Black seems to be winning a pawn for the exchange, giving the appearance of resisting.  However, it is a moot point since the White Rooks will soon flood into the Black position with decisive effect.  Tal wrote : ”The activity of White’s heavy pieces assures him of the win.” The most accurate move now is 31.Qd8.

TAL’S MOVE WAS GOOD ENOUGH TO WIN, HOWEVER

It should only be a question of time before the White Rooks prove their superiority.