The 1974 Canadian Open ; a great tournament! 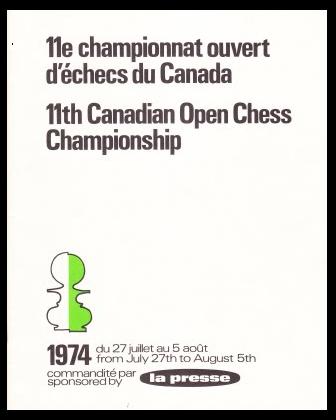 The Canadian Open was held at Place Bonaventure, Montreal

La Presse was the sponsor of the Canadian Open

Roger Lemelin (1919-1992), CEO and editor of the largest French language newspaper in Quebec, La Presse , was the single biggest promoter of chess in Montreal ever. Starting with the wildly successful Quebec Open in 1972 soon after the Fischer-Spassky match and continuing until 1979 with the Tournament of Stars (which brought Karpov , Spassky and Tal to Montreal), Lemelin put Montreal on the world chess map.

La Presse sponsored a good many open tournaments in Montreal during those years. I remember that during the 1974 Canadian Junior Championship (Hart House, Toronto) Jean Hebert and I received 75 dollars each from La Presse to help cover our expenses.

Lemelin was born in Quebec City. From 1944 to 1952, he was a Canadian correspondent for the American magazines Time and Life and, from 1972 to 1981, chief executive officer and editor of La Presse.In 1980 he was made a Companion of the Order of Canada. In 1989, he was made an Officer of the National Order of Quebec.

Lemelin also wrote the long-lasting TV series based on Les Plouffe, a great success on CBC’s English and French networks in the 1950s, and the scenarios for the popular screen and TV adaptations of the same novel, directed by Gilles CARLE.
(you can click on the photos)

Ljubomir Ljubojevic was the worthy winner of the open, with an impressive 10 points from 11 games! Enroute to this title, he defeated GM Vlastimil Hort, GM Duncan Suttles, GM Miguel Quinteros and IM Lawrence Day. He also drew with GM Bent Larsen and future IM Leon Piasetski.

The Canadian players did quite well. Duncan Suttles achieved one of his best results ever, finishing in 2nd place alone with an impressive 9.5 points. IM Bruce Amos finished with 9 points tied with GM Bent Larsen. Leon Piasetski and IM Lawrence Day finished the tournament with 8.5 points each.

Almost all of the top Canadian players participated (I was working at the time). Looking closely at the crosstable you can see names like Maurice Fox (photo on the right,mutiple Canadian Champion), IM Zvonko Vranesic, IM Laszlo Witt and Ignas Zalys. Bryon Nickoloff and Peter Nurmi also participated. So did Robert Wachtel , Walter Dobrich and Denis Allan. My brothers Jim and Grant represented the Spraggett family. You can even see Larry Bevand’s name among the participants!

The organization of the Canadian Open was nothing short of superb, as you can see from the above chart. When you have a great sponsor like La Presse then it is not difficult to do a professional job!

THE GAME THAT DECIDED FIRST PLACE!

SUTTLES WOULD HAVE BETTER LUCK AGAINST THE DANISH SUPERSTAR:

White has a winning position; however, Suttles almost loses the game!

Laszlo was a player who had no fear of any player, regardless of their reputation! Here his pawn sacrifice does not quite work, however. Larsen ends up winning a great game.

Portuguese legend, IM Joaquim Durao, has often told me how much he enjoyed the Canadian Open in Montreal. It was his first time in Canada!

I have always been a student of the great Larsen. His games in the English opening are a gold mine of ideas. Here Larsen continued with 12.Nd5 with a small edge.  Later, after much manoeuvring in a more or less balanced position, Larsen got the edge in an interesting ending:

MAYBE THE BEST GAME OF THE TOURNAMENT!

Very provocative, very much in the style of the Canadian IM. However, it involves too much risk when facing a top-ten player.

White to play and start a very strong attack!