Tensions rise between Russia and Ukraine

Official website
It is almost a ghost-town in Khanty-Mansiysk right now!  Of the original 128 players who showed up the first day, only 4 are still there!  The event comes to an end on the 20th.

The widely anticipated opening round of the semi-finals between 2 Russian grandmasters and 2 Ukranian grandmasters ended in 2 listless struggles.  Grischuk vs Ivanchuk was a 22 draw, while Svidler vs Ponomariov was 20 moves long.  There is very little to say chess-wise about either game:  neither game gave the 3 spectators time enough to fall asleep!  The ‘struggle’ carries on tomorrow… 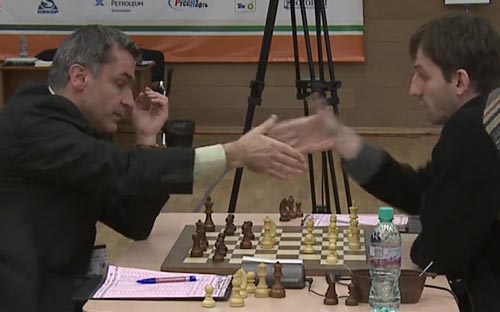 A high-speed camera was necessary to record the  draw (22 moves).  Notice the blurr…that is fast!

DIPLOMATIC INCIDENT
MARS  SVIDLER-PONOMARIOV GAME?!
We all know that  recently the Ukraine has  experienced difficulties paying its gas bill to Mother Russia, and this has lead to increased tension between the two cold-war allies.  On more than one occasion Russia has actually turned off the gas pipeline!
It is therefore only natural that back home these semi-final matches have added significance and fans have put a lot of pressure on the players in Khanty Manskysk.  In today’s game this tension  created an ugly incident.  This was recorded on camera!
1

The game started without incident until Svidler had to go to the washroom for a few moments…leaving Ponomariov alone at the board.

Ponomariov then grabbed one of Svidler’s pieces and put it on another square, hoping that his opponent would not notice.  BUT when Svidler returned he immediately noticed that something was not right (he had 2-light square Bishops!).

Svidler ajusted the piece and then looked about to make sure that the arbiter was not watching, and then he jabbed Ponomariov’s right ear! POW!!

For the rest of the game Ponomariov was seen to be in obvious pain! 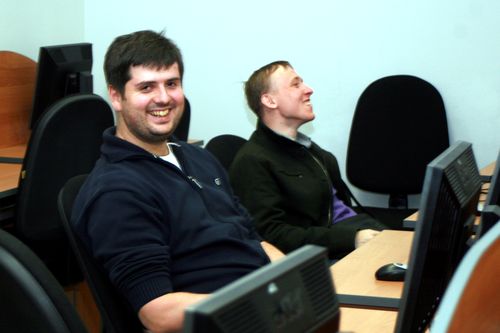 Ofcourse, I made that story up!  Svidler and Ponomariov are great friends.  HOWEVER, the games today were so utterly boring that my imagination got the better of me….what else is a blogger supposed to do?
FOR  the record, it is TRUE that the Ukraine often does not pay its gas bill….so some of the above is based on fact.
SPRAGGETT ON CHESS
Share