As can be seen above, 9-rounds was hardly enough to get a clear winner.  Eleven GMs tied for first with  7 pts and 13 players-all GMs except for number 14, Bernadskiy (a mere IM)–  had half a point less.  Eljanov won on tie-break.  Congrats to everyone involved!  This year’s Tchigorin Memorial was a super strong tournament.

I continue with some tactical exercises and tidbits from this tournament: 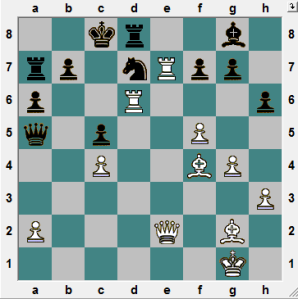 The position after 28 moves.  With opposite side castling the Black King has not found a safe haven as virtually every White piece is on top of his majesty.   The two White Bishops beg demand a violent end!

Position before Black’s 23rd move.  Clearly White is having troubles developing his Rooks, the result–no doubt– of an earlier pawn snatching campaign.  But the real problem here is the White King: it is dangerous to be on the same diagonal as the Black Queen.  IN THIS  position White is hoping for 23…Bxd4 when 24.Rae1! keeps everything undercontrol, but the young grandmaster is not so complacent as to limit his sight to winning back his piece… 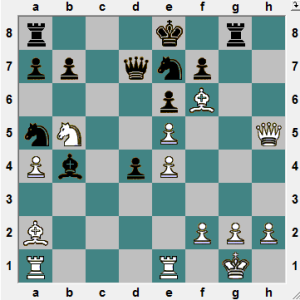 Position after 20 moves.  Quite simply, Black has neglected his development and –especially–his King, while White has not.  Punishment  must be  swift and merciless! 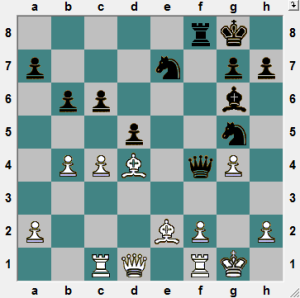 Position after 19 moves of play.  White is clearly better, an exchange up and with the Bishop pair.  The only problem–and it is not too serious–is his King is a bit exposed with his pawn on g4.  Here the correct way to proceed is the cautious 20.Rc3! (cutting out any …Nh3 nonsense)  and  planning to follow up with Re3 and Be5, expelling the Black Queen from its strong position.  If Black tries 20…Ne6, then 21.Be3  Qe5  22.Ra3 and it is just a question of time before Black will be in full retreat.  White must win.

HOWEVER, White decided to rush things and got  careless:

Chess can be a cruel mistress!  Popov was ready for the immediate 20…Nh3+?  21.Kg2! when Black loses even more material.  However, in his rush he overlooked a small detail… 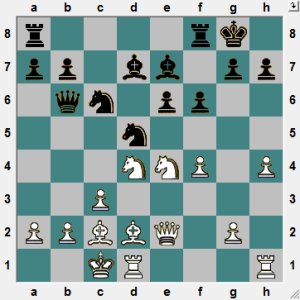 Position after 15 moves.  Opposite side castling with all the pieces on the board.  What happens here  reminds me of some old games of Steinitz when he used to play h4 and then sac, sac and sac!  White deserves credit for his precise calculation and energetic attacking play.