ON THE IMPORTANCE OF MOVING FIRST

The 74th ch-ARM 1st League, just the other day.  Position after 45 moves. A super-sharp position with each side having a passed pawn on the 7th rank!  In such situations having the move can make all the difference in the world: 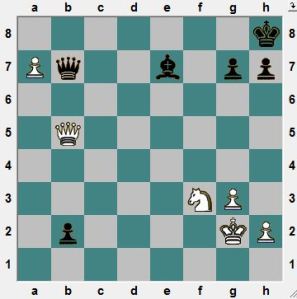 Now it is all clear! The combination of weak back-rank and pawn on the 7th is too much to defend against!  The game continued one more move: 47…Qc8  48.Qb8! and Black threw in the towel.

The Portuguese Tch taking just the other day.  Position after Black’s 19th move (19…Bf5).  The position of the Black King in the centre fully justifies White’s Exchange sacrífice:

The strong d-pawn and easy access to e4 for the White Knight spell bad news for the Black pieces. Black quickly needs counterplay… 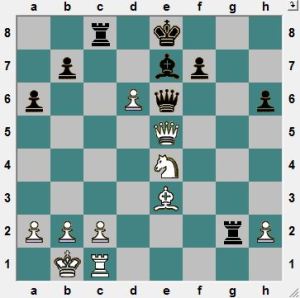 Now exchanging on e6 and then taking the Knight on e7 should be enough to win the game in the long run, but it would be nice to end the game long before then!

WHITE TO PLAY AND CRUSH BLACK!

Also the Portuguese Tch.  Position after 22 moves. The combination of weak back-rank and lack of development spell problems for Black.  Do you see how the grandmaster is going to take advantage of this?

THROWING AWAY A GOOD POSITION…

From the TCh-ESP CECLUB 5th-12th 2013 just the other day.  Position after White’s 27th move (27.Rcd1)  Black has an excellent position!  His active Queen and well posted Knight tie White up.  It will be difficult for White to not lose a pawn in most continuations.  In any case, as White is not threatening anything special, a solid move like 27…Rab8 (amongst others) is a good place to start.

INSTEAD, probably over confidente, Black sticks his head into the lion’s mouth: 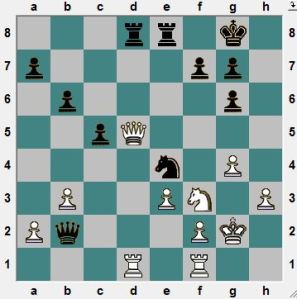 Probably only counting on 28.QxR? RxQ  29.RxR+ Kh7, when Black can not possibly be worse…. 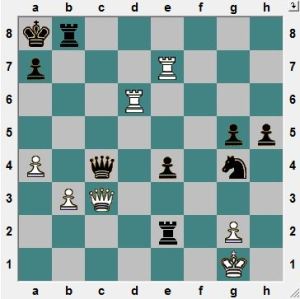 From the 74th ch-ARM 1st League just the other day.  Position after Black’s 35th move (35…Qxc4!?)  Ofcourse, Black is busted and has been for a while.  HOWEVER, he tries a desperate trick to try to reverse his fortunes…Should White take the Queen (either way) then he gets mated along the back-rank!  Instead, White was too clever to fall into this trap…