Sables-d’Olonne Open  2014.7.18   Position after Black’s 16th move (16…Nc4?!), attacking the White pawn on b2.  At first sight Black stands very well and is even trying to develop the initiative. However, in chess the TRUTH often has little to do with outward appearances and superficial threats.  As Lasker wrote, ‘‘On the chessboard, lies and hypocrisy do not survive long. The creative combination lays bare the presumption of a lie; the merciless fact, culminating in the checkmate, contradicts the hypocrite.” A Manual of Chess (London 1932)

All very true and well, but the reader must still dig deeply into the above position to find its secret.  Good luck!

HOW DOES WHITE GET A BIG ADVANTAGE? 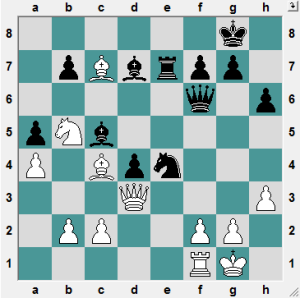 Sables-d’Olonne Open  2014.7.15  Position before Black’s 25th move.  Black is very active, but must play precisely as  after the straight forward 25…Bxb5 and 26…Rxc7 the White Queen will simply capture the Knight on e4 with a good game.  You need to dig a bit deeper into the position to find the pot of gold…