2011 UKRANIAN CHAMPIONSHIP
2nd round: all draws

As I wrote yesterday, this year’s championship is really tough, with only Ivanchuk missing from the line up (he is playing  in Romania).  All the games were drawn today.  Only the Kovchan-Vysochin game was really interesting –in my humble opinion–and seemed to be going in White’s favour for quite a while. Blunders by both sides allowed Black to escape to an opposite colour Bishop ending with 2 extra Pawns for White, but no real winning chances.  The game lasted 130 moves…I cut short the game at move 47 for practical reasons in the pgn-viewer, though if you are a masochist you can find the complete game scores from the 2nd round  here.

White has emerged from the opening with some initiative, but Black’s pieces (especially his Queen-Bishop) are reasonably active.  With White’s last move a little trap was set that Black did not even suspect and fell right into!  What Black should play is eliminate the dangerous Knight on e5: 21…Bxe5!  22.Bxe5 PxP!  with a tough fight ahead.  White has the choice of taking on f6 or playing 23.Bd4 (my pick), and stands somewhat better, but the game is far from clear.
Instead, Black exchanged on f5 first:
21…PxP? 22.Nxf7!

Now White has the very strong 24.Bc4! (the a2-g8 diagonal is White’s) after which Black does not have a good move. Retreating the Queen to c7 allows the immediate Bxf4; playing to c6 allows mate in one(!); playing the desperate …Bxg2 simply does not succeed in doing anything constructive.  Probably Black has nothing better than playing the awkward 24…Bd5!? and pray after White’s 25.Bxf4! (with advantage in all lines)
INSTEAD, White played the less active 24.Bc2 which allowed Black to breath a bit.  But a couple of moves later Black played weakly again:

Black has some counterplay.  Here Black has 26…Re8! ( a difficult to find move) and it is still hard for White to break through Black’s defences.  Infact, Black would have good chances of saving his skin!  INSTEAD, he played weakly:
26…Ng4?

Did  Black think that he was winning here?

White is a pawn up with the Bishop-pair to boot!  Surprisingly, White did not win!  I wonder how many of spectators waited around to see all of the 130 moves?!

Meanwhile, the King’s tournament in Medias (Romania) got underway yesterday.  I don’t consider this tournament as interesting as the Ukranian Championship, but the presence of Carlsen and Nakamura has more than justified the sponsor’s investment: most of the chess press prefers to cover Medias at the expense of Ukraine!  There is just no accounting for poor taste!

Nakamura played poorly and lost without much of a fight.  Perhaps the American superstar was nervous. 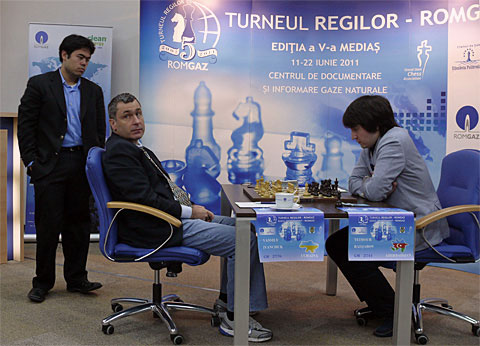 Ivanchuk also had an easy day at the office against Radjabov’s Kings Indian.  It is hard to believe that White’s 9.Bf3 is anything special, but Radjabov reacted poorly and soon had a miserable position.