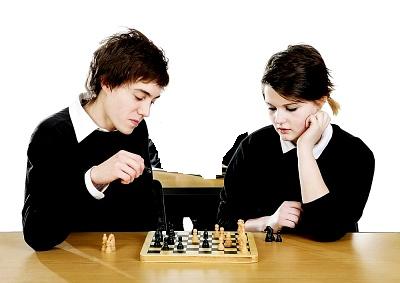 There are some chess websites that I faithfully visit on a daily basis, and the website of Pogonina is certainly one of them! Just the other day Natalia posted some numbers showing the average ratings of the top masculine players (by country) vs the top female players of each respective country.
I suppose there is no surprise that (on average) the top male players out rank the top female players by several hundreds of points (though the gap is closing in recent years!), nor that most of the highest rated females are from the old Soviet bloc countries.  Ofcourse, China and India are quickly upsetting the apple cart here…as is France. 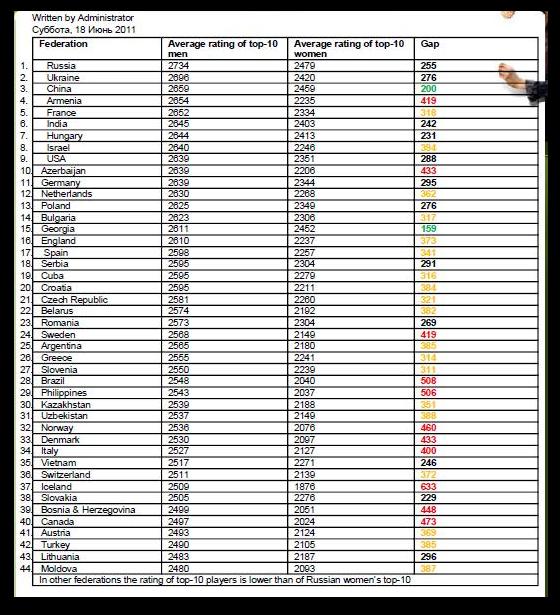 Canada finds itself in position number 40 ( which is neither very respectable nor something to be ashamed of–I think they invented the word mediocre for such cases). The average FIDE rating of the women is slightly over 2000, which is a good sign (I think) and an improvement over the situation that existed some 10 years ago or so.
It is worth taking a look at the FIDE-RATING list of top female players in Canada (active and not so active): 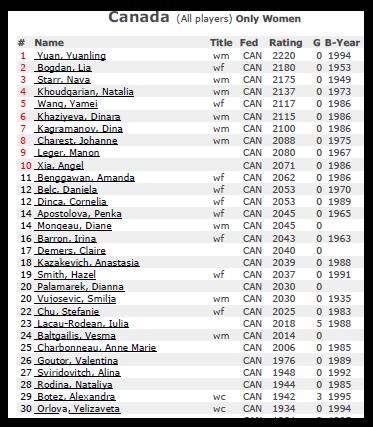 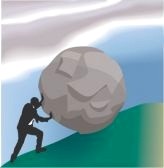 OLYMPIC-SIZED  OBSTACLES
While still on the topic of Canada’s top female players, the CFC has just published an interim list for selection purposes for the next Olympiad sometime next year.  Curiously, again– not a single female player has played  enough rated games to be eligible!  Undoubtedly that will change in the next 12 months, but only reluctantly and probably with some pushing involved (!)

Traditionally, Canada’s top female players only view the Olympiad as an all-expenses paid vacation.
________________________________________________
Canada’s interim male selection rating list is given below.  The list includes both active and not so active players.  As the CFC has in recent times wrecked its rating system by allowing various types of bonus points to distort some of the more active players ratings (by as much as 200 points or so in some cases), the order of the players is also –naturally– distorted and does not accurately represent relative strengths.

In particular, those players who normally don’t play much chess in Canadian-rated tournaments ( in particular, Panjwani and Roussel-Roozmon) have not been gifted the several hundred rating points that players such as Sambuev, Gerzhoy, Samsonkin, Noritsyn and Hansen have benefited.

It looks like more than half of those on the list have not played enough rated games to qualify (as of this date), though that will no doubt change in the near future as the summer is the time of the year when most players are quite active.  As well, a number of players won’t even try to qualify: Lesiege (has he been abducted by aliens–he has not played since 2004), Tyomkin , Teplitsky and myself.

That means that the National Team is looking something like Sambuev, Bluvshtein, Gerzhoy, Hansen and Noritsyn.  I have heard that Charbonneau might try to qualify, but he has been quite inactive in recent times, having changed jobs atleast once since leaving Belzberg Technologies.

In any case, there is still a long way to go before next year and much can change.  The Olympiad selection usually brings out the worse in the CFC (principally , not following its own rules and regulations) and we can expect (and even bet on !) atleast one or two scandals before sending off our brave heroes…

A good starting point is to try to avoid the usual Olympiad meltdown by picking a selection committee that avoids conflict of interest issues.  (Having everybody from Toronto does not fall into that category!)  And I would hope that Ilya Bluvshtein is fed up with all of the fallout that he has experienced last time (rules problems, selection problems, travel-agency problems, etc) and would instead allow someone else to coordinate things.  Besides, since his son Mark is an active member of the National Team, there is some potential for conflict of interest issues here…

Speaking of which, the CFC paid $5,000 more than it should have last time to send the teams (a travel glitch in which FIDE was partly responsible): can someone tell me how much compensation the CFC has received from FIDE thus far?

Finally, my own suggestion for the 2012 National Team.  I would scrap the current selection rules (they suck, have grotesque conflict of interest issues and even allow someone –if you read very carefully the fine print–to buy his way on to the team ! ); I would scrap the Selection Committee as it exists today.  And since I am allowed to make my own suggestions (this is my blog, afterall) I would simply appoint Sambuev, Bluvshtein, Hansen, Charbonneau (if he was willing to get some practice before then, if not then Roussel-Roozmon) and Panjwani.

Hansen and Panjwani are both GM strength players and impressed me at the last Canadian Zonal.  While there are some other experienced players around on the list–and some not less talented than those I have named–this team is my choice and it looks like the best Canada can get together.

However, we know that that will not happen!  The CFC has rules in place and the Executive always wants its fun and jolly to  royally screw up the entire process while pretending that the rules actually mean something…and also let us not deprive everyone else the spectacle of one scandal after another!  It has become as  Canadian a tradition as borsche.