Two NASA  astronauts have challenged the citizens of Earth to an otherworldly game of chess.
Greg Chamitoff and Greg Johnson launched Monday to the International Space Station aboard the space shuttle Endeavour. They’re plotting their moves from orbit over the next two weeks, in a competition facilitated by the United States Chess Federation (USCF).
Regular Earthbound folks can suggest or vote on moves at the USCF website, though the federation will ultimately decide how to respond to the astronauts’ gambits. NASA and USCF will use Twitter and Facebook to notify participants about the status of the game and when to vote on moves.
“Chess is a great game that challenges the mind and helps young people develop critical thinking skills that will serve them well in math, science and all aspects of their future careers,” Chamitoff said in a statement. 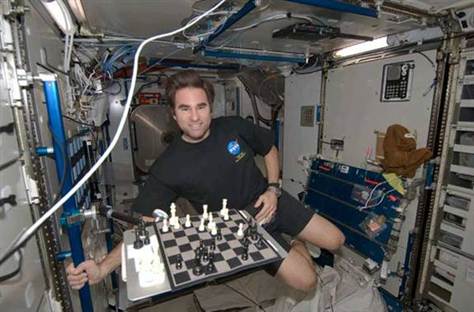 This game marks the second Earth vs. space match put on by NASA and the USCF. The first, in 2008, pitted the world against Chamitoff, a chess aficionado who was living aboard the International Space Station at the time.
Chamitoff lost, felled in part by the slick moves of the chess club at Stevenson Elementary School in Bellevue, Wash.
Chamitoff had brought his own chess set with him to the orbiting lab on that 2008 mission. He took a different set with him this time around, perhaps trying to change his luck. Having Johnson on his side for this match can’t hurt, either, though the two astronauts will still be sorely outnumbered.
“We hope to do better in this Earth vs. space match,” Chamitoff said. “But, I have to admit, it will be a challenge, because we have an extremely busy flight ahead of us.”
___________________________________________

Meanwhile, there has been no word   from FIDE as to whether Kirsan Ilyumzhinov will make an appearance at the internatinal space station (ISS) to commemorate the event.
SPRAGGETT ON CHESS
Share