Some chess from the World Teams 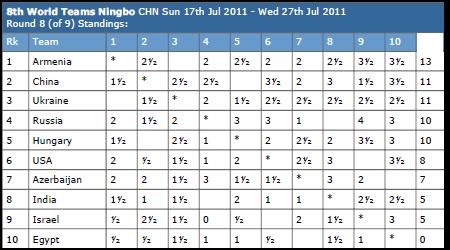 With one round left, Armenia is in front and is the only team not to have  lost a match so far.  Their last opponent will be the Ukraine, so things will be really exciting!  Anything can still happen.  I am really impressed with the chess from several points of view: fighting spirit, theoretical novelites and creative output.  To my mind, this tournament is producing chess that is a class above what we are seeing from Biel and Dortmund. (No slight intended to either tournament, but instead an appreciative observation from a chess fan.)
GM   HARIKRISHNA

The Aronian vs Harikrishna encounter on the first board of Armenia vs India produced an important new concept in the fight against the super-solid (read: super boring)  Lasker’s Defence in the Queen’s Gambit Decline.  This line has been causing White headaches for years as more and more GMs are gravitating towards this apparently  risk-free and  straight-forward defence.
Aronian’s new idea is to try to exploit the early —h6 by Black and commence a Kingside attack.  Several previous games toyed with this idea, but Aronian’s move order is the most precise way to proceed:
10.h4 !?  Nd7  11.g4!

White intends to follow up with g5 , breaking open the Kingside or forcing a concession from Black.  In the game continuation Harikrishna counter-attacked in the centre (a natural reaction) , but seemed to be always a bit worse.  The Queens quickly came off and Aronian had his favourite type of position: an ending with a slight pull and no worries of his opponent getting much counterplay.

Aronian (and his Kingside pawns) on a roll…
No doubt we will see a lot more of this idea in coming months.  But my impression is that this idea of advancing on the Kingside will discourage a lot of ordinary players from playing the  Lasker’s Defence.  Now if only someone can find a similar idea against the Petroff (!?)…..

Wow!  Is that really Judit?  Charming!  She might still make my ‘winning smile’ series!

Brain food!  There is nothing better for a chess player than a banana during the game. 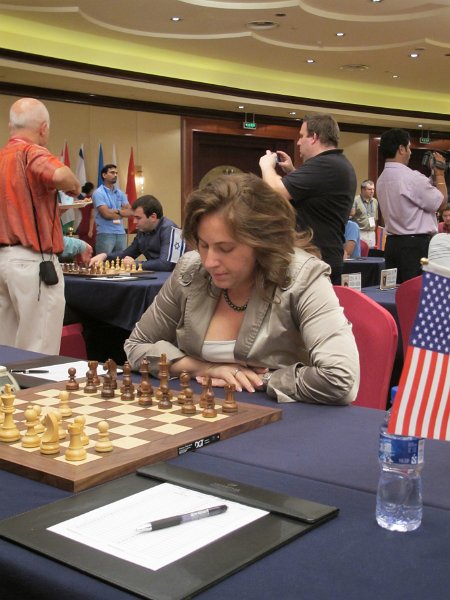 An official photographer busy at work

Smile, you are on Candid Camera !

Competent people are an asset to any important tournament organization
Share