The Elite section of this year’s edition of the Capablanca Memorial got underway earlier this week in Havana.  A double round-robbin between 6 very strong GMs, headed by Ivanchuk.  The tournament used to be a single round robbin with between 10 and 16 players, but times have changed and the Cuban chess federation no doubt feels the economic pinch like most organizers in the west.  Gone are the times when the state merely had to snap its fingers…Cuba is fast moving towards a market economy.  Dollars are scarce.
Too early to pick a favourite, and though I usually like the underdog, this time Bruzon has yet to score even half a point.  Never the less, I expect a fast recovery and a great second half.  What the heck:  I pick Bruzon as the eventual winner! (But no bets, please!)
The games that I have seen so far do not inspire me, but my readers will no doubt find something to learn from.  I give 2 examples along the ”unforced blunder”  theme.  It is not often that strong grandmasters make embarrassing blunders, but in the hot Havana sun it is quite common.  Lasker himself could not even win a single game when he played his world championship match against the great Capablanca in 1921.  After his last blunder he simply apologized to the match organizers, resigned the match (congratulating the Cuban on becoming World Champion), packed his bags and went home!
POSITION AFTER WHITE’S 31st MOVE (31.Qg4):
GM  BRUZON

While Black has an extra pawn, White’s pieces are very active and give full compensation.  Infact , Black must be careful because White also has a threat…. that the Cuban superstar overlooked  it  entirely!
Correct would be 31…Ne6, with a tough struggle ahead for both sides.
Instead, Bruzon played 31…Qa4??  How does White win after this?

GM  ANDREIKIN
The current World Junior Champion had just got married and we all know that this usually means that one should be wary about returning to over the board competition soon after that ….
Here the position is relatively boring and uninteresting.  Sterile might even be a good word to describe it!Probably White should play 17.a3 and offer a draw!  Instead, Andreikin played the horrible 17.Rac1 (seems natural enough: Rooks belong on the open files!)  How did Ivanchuk take advantage of this and gain a decisive edge with just one move?

http://www.skbosna.ba/
The Bosna International finished just the other day.  It was held in Sarajevo, one of my favourite cities in the world!  The Georgian superstar GM Baadur Jobava (born 1983) won. 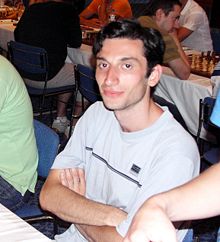 Baadur has a brother who is an IM.  In Georgia chess is always a family affair!  Baadur has been one of the top Georgian GMs for years, having represented Georgia at the Olympiad since 2000.  Jobava is an extraordinarily talented player, capable of beating anyone and with any opening or colour.  He already has a long list of wins in international tournaments.


BLACK TO PLAY AND WIN!

GM  JOBAVA
Here Black’s extra pawn is not enough compensation for having his King stuck in the centre.  Jobava continued 22.f4!?  g6  23.f5! gxf5  24.Nxe6! with a strong attack.  In the diagram above, what did Jobava overlook? (Solution Monday)

GM Mark Bluvshtein  is participating in the strong Premier tournament of the Capablanca Memorial in Havana right now, in a  10-player round robbin.  While it is too early to predict a winner, with his 1.5 points out of 2 games Mark is in a good position.  I am certain that my readers wish him success!

The game has not been going well for the Canadian.  White has a clear positional advantage (2-bishops and the Black King is more of a target than its cousin).  Luckily for Mark, the Cuban began to think about the Black weakness on g5 instead of playing 31.Qa3! (thinking about the Black monarch), and Mark was able to organize some counterplay later.  Curiously, in the end Black’s Knight-pair proved stronger than the Bishop-pair!