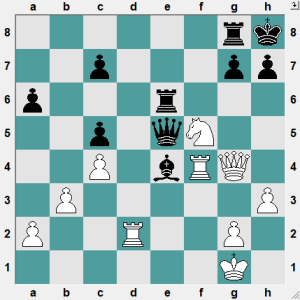 India Ch, Trivarur,  2015.11.17  Position before Black’s 37th move. I asked the reader to find the best continuation for Black (in the game Black prematurely exchanged  his Bishop for the Knight, and then found himself in difficulties, even losing the game in time trouble)

The solution is surprising, and has several critical moves, requiring accurate play from both sides. Let us start with the first move…

Now there is no …g5 to annoy White.

Despite having only a Rook and Knight for the Queen, White has a compact position with no weaknesses.  I would think that White has reasonable chances of holding out with some fortress type of idea….

Relatively best, given that Black was threatening mate in one.  Die-hards will have noticed that the ‘brilliant’ 41.Qxh7+ does not work.

What a hero this Bishop is!

Now the smoke clears and we realize that the White King is just too exposed.   There is no longer any real resistance available for White.  After the relatively best 44.RxR Qg1+ 45.Kf4 QxR(g6), Black , threatening (amongst other things) …Rf8, the game would not last much longer.