Recently Topalov’s life-long manager, Sivlio Danailov, who reputedly earns a cool 50% of every dime that the Bulgarian star earns, is in the news again.  Apparently while in Croatia , running for the presidency of the European Chess Union (!), Danailov has been making provocative statements regarding the upcoming world championship match between title holder Anand and challenger Topalov (April 23 to May 12).

Perhaps it was because I’m currently reading The Age of Empathy – Nature’s Lessons for a Kinder Society, Frans de Waal’s latest book on how and why humans (and other primates) are capable of showing empathy and solving moral problems – that I found myself shocked by the recent Europe Echecs interview with Topalov’s manager Silvio Danailov. Topalov’s match against Anand hasn’t even started yet, but the first provocations are already in the air again. 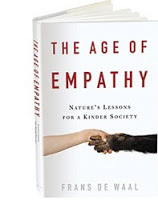 Frans de Waal is one of the world’s leading primatologists and has written an impressive body of work about the similarities between apes and humans. In his latest work, he hands us a toolkit on how to improve our society by looking at (human) nature. Empathy and morality are not only human affairs, but also play an very important role in other species, such as chimpansees and dolphins. De Waal argues that the election of president Obama is a clear sign that the ‘nightmare’ days of Reagan and Thatcher are over and that perhaps it is time to transform society into a more empathic place. Well, I think it’s time to end the ‘nightmare’ of Toiletgate and start a new era where chess professionals actually show some empathy and respect for each other instead of constantly trying to provoke the opponent.

It’s all about the cookies…
In the video of the interview, Danailov talks about whether the ‘Sofia rules’ apply in the upcoming Topalov-Anand match, to be held in Sofia next month. They will not be applied – at least not officially. But that’s no problem for Danailov:
”If one player doesn’t offer or accept draws they will apply. Vishy [Anand] doesn’t agree but he will be forced, because Topalov will not offer him a draw and he will not speak to him. So, what to do? He will be forced. This is the best. This is the best, otherwise… ”

Insatiable appetite for cookies
”I don’t know, there’s people who are absolutely conservative, they are against these rules, but this is the future of chess. This is for sure. Everybody now understands this. Of course, I understand there are some players, old players, who don’t want to work… they like short draws and whatever. They like to offer them, but this is finished. Chess … we need a professional sport, and in professional sport, we cannot do this.”-Danilov
It’s a remarkable statement: Anand – forced against his will to comply to rules that are not official; this is the future of chess, no matter what ‘old’ chess players say – their opinion clearly is unimportant and shouldn’t be respected. But the most remarkable is that Danailov says that Topalov will not only refuse to offer any draws but also will ignore his opponent altogether: “He will not speak to him.” In other words, he will drop all courtesy and normal etiquette and create a ‘non-speaking terms’ atmosphere in a match in his home country, against one of the most relaxed and friendly chess players in the professional chess scene.

Is Danailov trying to promote the upcoming match, or scuttle it?
And why? Because of ‘professionalism’, that vacuous word all too often misused by people who refuse to acknowledge that most if not all work requires empathy and social skills – in other words, people who haven’t the slightest idea what ‘professionalism’ really means. (Here’s how one competency library actually defines ‘professionalism’: “Thinking carefully about the likely effects on others of one’s words, actions, appearance, and mode of behavior.”) To exclude all social elements from a profession is in fact the ultimate un-professional thing imaginable.
It’s a fallacy Frans de Waal convincingly demolishes in his book, showing how cooperation and social interaction are absolutely crucial to succeed in any job and society, and are in fact measures by which we judge people and choose them as colleagues, friends or mates. Not so for the Bulgarians, who’ve created their own rules and apparently don’t mind to be social isolates in the chess world, as long as the results speak for themselves. What an utterly unprofessional attitude!
In a similar vein, we’ve argued before on this site that shaking hands before and after a game shouldn’t actually be incorporated in the rules of chess, but instead should be respected even though they’re not in the rules – because, as De Waal shows, that’s how empathy and social skills work: intuitively, without explicit rules, automatically. And that’s why apes and other animals are capable of displaying them, too, without being able to read lawbooks or guides on ethical behaviour. It’s a thing of nature. It’s in our genes.

Super model Kass and Danailov singing while Topalov, embarrassed, looks on helplessly
The sad thing is that we’ve seen this all before, four years ago in Elista. There, the Bulgarian team made themselves ridiculous in the eyes of world by accusing Vladimir Kramnik – without a shred of hard evidence – of cheating. They even published a childish book on it – still lacking any solid evidence – to prove their point, which I reviewed back in 2007. Perhaps it’s worth recalling how Topalov accused Kramnik of unfairly using his ‘home advantage’ up till the Kremlin in order to “keep the title at any cost” and that he (Kramnik) “will not balk at violating ethical principles.”

In his book, Topalov wrote that it was naive of him to agree to the match against Kramnik being played on Russian (well, kind of) ground, because such a match obviously couldn’t be fair. Well, it’s four years later and look who’s playing on home ground this time. Will Topalov and Danailov return the compliment and agree if Anand claimed a match in Bulgaria couldn’t ever be fair because of some kind of home advantage? Frans de Waal devotes an entire chapter on the ‘walking in other man’s ’shoes’ concept, but looking at the interview of Europe Echecs, I have my doubts if Danailov has read it. Note how he laughs during the entire interview, routinely dismissing dissenting views and announcing how the reigning World Champion will be ‘forced’ to do this and that. Does that sound like someone showing any kind of empathy or ‘ethical principles’ at all?

Danailov on the campaign trail!  His image improves after several glasses of wine!?
Silvio Danailov has recently announced his candidacy for president of the European Chess Union. Heaven forbid someone who doesn’t understand the first thing about ‘professionalism’, baselessly accuses some world class players of unethical behaviour and laughingly tells others what to do, ever gets to play such an important role in European chess, even if he did show some good initiatives like the exciting M-Tel tournament and his passion for more fighting chess. This kind of destructive madness really can’t be tolerated in our beautiful chess world. Frans de Waal ends his book The Age of Empathy (I am quoting from the Dutch version) with the following words:
We must rely on our intellect to figure out how to balance individual and collective interests. One instrument we have and which enriches our thinking enormously, has been selected over ages, meaning its survival value has been proven time and again. It is our capacity to show a sense of oneness with others, to understand them, and to place ourselves in their situation.
We can only hope this message will reach the Bulgarian team before the Topalov-Anand match starts.
________________________________________
I first met Silvio Danailov in some tournaments in Spain before V.Topalov became one of the top 10 players in the world.  Silvio was just a normal guy from what I could tell.  There is no doubt, however, that today he lives and breaths for Topalov and for Topalov’s best interests. He is just the kind  of manager that one would want: a ruthless son of a bitch who knows what he wants and will cut your throat to get it!
Danailov certainly is not objective (nor capable of rational compromise) on anything to do with Topalov’s best interests.  I am surprised that Topalov–for whom I have the highest respect as a person of integrity and character–would allow Danailov to create so much negative publicity (and energy) just before the Sofia match with Anand.

Valery Salov: bullied out of chess by ‘professionals’
Over the years I have personally witnessed some of the dirty tricks that Danailov has done.  I remember very clearly when I was seconding Alexy Shirov at the Dos Hermanas tournament (1997) one such incident.  Valery Salov had just defeated his protege (Topalov) in a long , boring game where it seemed that a draw was the likely result.  Furious, Danailov went out to the hotel lobby and for the next few hours used the public telephone to call as many organizers as he could and bad-mouthed Salov continually: ”Salov is bad for chess! His style bores spectators and hurts sponsors. You should not invite Salov to your tournament if you know what is good for chess!”  etc
As we know, Salov eventually gave up chess because of the lack of invitations to the super-tournaments (though Salov in an interview last year blamed Kasparov on this!).
In recent years there have been an increasing number of incidents where Danailov has been involved and scandal has been the result.  The 2006 scandal during the world championship match with Kramnik is one such sad case (unproven and malicious accusations of his opponent cheating during the game).  Another is the (alleged) signals that Danailov was sending to Topalov during a tournament.  And now the latest (developing) scandal with respect to Anand.
It is one thing to promote your client’s interests, but quite another thing to try to call into doubt, destroy or harm the reputation of your client’s opponents.  If I were Anand, I would seriously reconsider playing in Sofia while Danailov is not muzzled.
In any case, I share Chessvibes’ view on Danailov as president of the European Chess Union: Silvio Danailov would be the end of that organization as a democratic entity!  But I have faith that no one in his sane mind would ever vote for Danailov becoming president!