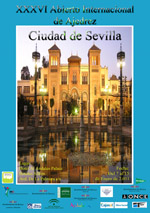 www.fsajedrez.com
The 36th edition of this annual event in Andalusia ended yesterday with a 2-way tie for 1st place between the Englishman Haslinger and the Indian Deep Sengupta.  Both had scored 7.5 points.  This writer finished with 7 points (undefeated), but in a 11-way tie for 3rd spot.  My tiebreak was quite low, given that one of my opponents (the Italian IM Lanzani) withdrew from the tournament after the 7th round!

Deep Sengputa (fresh from a victory in Hastings just weeks ago), Haslinger and the spanish IM Enrique Fernandez Romero (7points) –who earned a GM norm.

The pairings this year were quite strange, with numerous GMs noting and complaining to me of the number of 2200-2299 players floating around with a high score despite the tournament having so many titled players–no doubt because they did not play especially strong opposition.  From my own experience– having played more than 10 times in this event– I have to agree with them!  My line up of opponents was the weakest that I can remember!  Hopefully next year the organizers will solve their problem and once more make Sevilla one of the strongest opens in Spain…

The ‘other’ Canadian in the tournament–IM Leon Piasetski–finished with a respectable 6 points despite losing to GM Carlos Matamorros in the final round in an ending that seemed for the longest time to be drawn.  Leon’s next tournament will be the Gibraltar Open in about a week’s time.  (This writer also plans to participate).

AMALIA ARANAZ
By taking the pawn gambit Piasetski is now able to build up considerable pressure against the White Kingside.  Leon played 14…Bc5!.  Combined with the open f-file and the actively placed Queen on h5, White is faced with a difficult defence.  White soon made an imprecision,  giving Black the decisive chance to break thru, allowing an especially brutal finish.

My own play was quite good.  The past year saw me play much less than usual and so I need to play quite a bit inorder to get into form. I think one more tournament should do it…
POSITION AFTER BLACK’S 24th MOVE (24…d5?!)
:
IM BELLIA

A cat and mouse game in one of my favourite lines of the Spanish Opening (d3-lines).  White has built up some small positional plusses and Black lost his patience pushing forward his d-pawn, opening the centre.  This allowed White the chance to pin Black’s defences to his weakened e-pawn , preparing the way for advancing his Queenside majority.  Soon Black found himself with a hopeless task.

SPRAGGETT
The last round game started at 9am (!) and before my opponent could wake up he found himself with a depressing position!  Here White began the decisive breakthru, culminating in a pretty (obvious) Queen sacrifice.  White played the energetic 36.e5!