On  being ” boring, miserable and useless”

This year’s Aeroflot  tournament has been organized as a blitz tournament, breaking a long standing tradition that had put the Aeroflot tournament at the top of the list of super-strong OPEN tournaments.

I had the pleasure to play in the 2004 edition and I can tell you that this was an absolutely magificently organized  tournament!  And super-strong:  I played 7–2600 plus players in a row!  I left Moscow at the top of my game…
I am not the only grandmaster who regrets  turning such a rich tradition into a 5-day semi-serious blitz tournament , albeit having an impressive $150,000 prize fund and an equally impressive line up of some 100-plus grandmasters.  Chessbase published some of these regrets here.

Ofcourse, I have nothing against blitz chess!  In my youth I spent many hundreds of hours playing tens of thousands of blitz games and I enjoyed every moment.  Blitz is a nice break from  serious chess!  But it can never replace normal chess…
I was.  therefore, more than a bit disappointed to read Ilya Levitov’s  rationale for the change in the format of the Aeroflot tournament.

Ilya Levitov is the real voice behind the Russian Chess Federation (RCF) and a staunch supporter of Kirsan Ilyumzhinov’s efforts to change the image of chess
”We add something new. The sponsor made a specific request on what kind of format, participants and the program for the kids-spectators he wants to see. The classical tournament was great for the chess players. The sponsor has formulated his demand: we will close the classical tournament. It’s boring, miserable and useless …They were clear in what they want and how much they will pay for it. “
LINK

Ever since Kirsan Ilyumzhinov came to lead FIDE (1995) great efforts have been made to undermine chess’ long standing status as the game of supreme intellectual skill and to instead try to portray chess as a form of spectator entertainment, rivalling tennis and soccer.

Kirsan has all but eliminated the traditional time-controls infavour of 90-minute games.  He has made it his crusade  to make chess an Olympic sport and a TV-phenomenon.  He has failed on both counts, though the IOC does recognize chess as a sport.
WORSE STILL: this vision has become an  all or nothing  strategy and has backfired The game today has lost dozens of sponsors , prestige and  has virtually disappeared in every-day newsprint. Most reputable newspapers do NOT want to carry chess columns, even though they have in the past.

We can argue about definitions all we want, but a strategy focusing on having the non-chess playing world  recognize chess a SPORT will neither fill stadiums nor make chess into an entertainment phenomenon like football, tennis or hockey.  Why? Because the game of chess is primarily ART, and art is rarely entertaining to the masses.

”All art is useless”  Oscar Wilde
”A work of art is useless as a flower is useless. A flower blossoms for its own joy. We gain a moment of joy by looking at it. That is all that is to be said about our relations to flowers. Of course man may sell the flower, and so make it useful to him, but this has nothing to do with the flower. It is not part of its essence. It is accidental. It is a mis-use.” 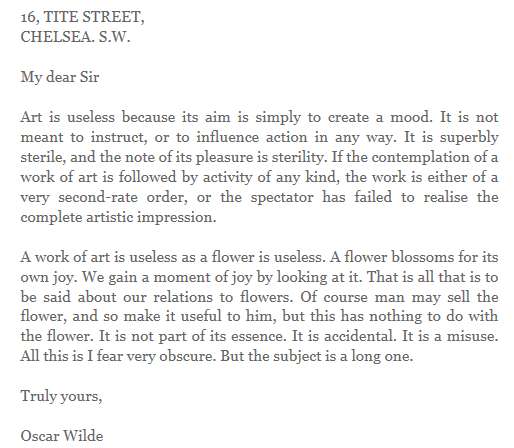 David Cronenberg:  “Entertainment wants to give you what you want. Art wants to give you what you don’t know you want.”    Entertainment is designed to put the spectator into a reassuring comfort zone.  Art, specifically,  is meant to challenge the spectator and will never leave him indifferent. (Thus Levitov’s ”boring , miserable and useless” actually recognizes chess as different from entertainment and implicitly accepts chess as ART)

Entertainment condescends to what it perceives as your level. Art assumes you’re at a high level and wants to take you higher — it conascends.  Entertainment wants to make you think you’re thinking, but actually steers you toward its chosen conclusion.  Chess forces you to think!  Chess is by nature difficult…and therefore not for everyone.

Ofcourse, Ilya Levitov is too intelligent a person not to know the difference between ART and ENTERTAINMENT.  He would have never reached the level of importance that he has achieved in Russia if he did not.  HOWEVER, Levitov is one of a growing number of powerful individuals in the chess world today  who look upon art as serving utilitarian purposes.
They deliberately choose to see the value of art mostly thru its usefulness:     ”What is troublesome about this is that it is almost antithetical to art. Part of the point to art is that has no utility, but we like it anyway….It reminds me of the bullying expression, popular in schoolyards and online, “What are you good for?” The implication is that the person it is directed at is good for nothing. They are useless. They have no utility.
It’s not that art has no utility. Much of it does; much of the greatest was created out of a need to be useful, at least in some way. But not all. Not by a long stretch. Yet if we increasingly see art as needing to be useful, what becomes it? And how do we value it? And, if useful, to whom and why?
Maybe most concerning, however, is how that affects the way art is created. If artists think in terms of utility, how does that affect their creation?”
Bill Wren

Bobby Fischer’s tremendous success running up to 1972 and his match with Spassky had extra importance because of the Cold War and this explains largely why he was the ONLY chess player to give the game some entertainment value.  Succeeding generations failed to repeat Bobby’s achievement.  Levitov and Ilyumzhinov have not given up on this dream…
TO CONCLUDE, it seems to me that  Ilyumzhinov’s and Levitov’s willingness to arbitrarily hack away at the classical time-controls in today’s major chess tournaments is uncomfortably similar to the emperor’s Joseph II well-intentioned comments about arbitrarily reducing the number of musical notes in one of Mozart’s masterpieces:

”My dear young man, don’t take it too hard. Your work is ingenious. It’s quality work. And there are simply too many notes, that’s all. Just cut a few and it will be perfect.”

”Which few did you have in mind, Majesty?”