From the European Individual Championship (women) in Belgrade two days ago.   Position after White’s 22nd move (22.Qe7).  The game is complex, but balanced.  White threatens the Rook on a3 as well as Bd6 in some lines (the Rook on f8 has few squares). The question is how to handle these threats and at the same time maintain the balance…

Here Black should play very precisely:  22…Qe6! when everything is undercontrol.  If White takes the Rook on a3 then Black simply captures the Rook on d5.  If instead 23.Bd6 the 23…Re8! follows.  Should White take the two Rooks for the Queen with 24.QxR+ QxQ  25.BxR  Be6 and both sides have chances, neither the Queen nor the Rooks are particularly dominating in this position.

INSTEAD, the Russian champion must have become confused and immediately lost the thread of the game (an expression often used in chess when one player loses his way in the complications) when she played:

A serious mistake that gives White the opportunity to win the game with a cute tactic.  However, even if the following tactic did not exist in this position, it is difficult to see what Black would have done against 23.Bd6!?, another strong move.

This deflects the Black Queen.  No doubt Gunina had forseen the move, but not the following White move! 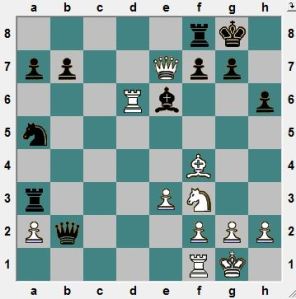 Black has no choice, the Rook on a3 must be defended should White play Rxe6, uncovering the White Queen’s attack on a3.

Scene at the 100th British Championship, courtesy of LINK

UPSET!  Grandmaster losing to a 2100 rated player!  From the 100th British Championship that is taking place right now.  Position after White’s 20th move.  The experienced Flear has  his favourite opening (Nimzo,Qc2 variation), and has the Bishop pair as well as a strong pawn centre.  All he needs do now is CASTLE and he will be as happy as a pig in dirt!

But wait:  did I say castle?  You mean to say that an experienced grandmaster as Glenn Flear has forgotten to castle?  PITY!

HOW DID BLACK EXPLOIT THE WHITE KING IN THE CENTRE?