This weekend finds myself in Barcelona for the 9th round of the Catalan Team Championship.  ( LINK )  The round only begins later in the afternoon, so one of the things I like to do most is to visit cafes and just hang out,  engage in light chit-chat, watch people, do my cyber-blogging or just catch up on my personal mail.  Barcelona is great for this because the city is so cosmopolitan and attracts people from all over the world.
While Barcelona is one of my favourite cities in the world, and I love to spend weeks at a time here, for this team championship I can only stay one night (Saturday to Sunday) before having to head back home.  This time of the year I am quite busy and can not spend too much time away from home…so one more reason for savouring the time I spend here!
LONDON CANDIDATES:  WHERE IS TOPALOV?

LINK
If you are like me then you are expectantly following the Candidates tournament that began yesterday in London.  To be frank, with FIDE constantly changing the rules and schedules for its most important world championship-qualifying events, I have no idea how the participants came to be chosen.  Ok, I understand Carlsen being there, as well as Gelfand (2012-world championship challenger), but I am not certain how the other players came to qualify.  By rating?  Maybe…in any case I am pleased that a quality event has been organized and has so many stars in it.

STILL, the tournament would have been stronger with Topalov’s participation. After all, he almost won the 2010 world championship match against Anand…I think that Veselin’s absence in London is a serious blotch on the efforts of all who put together this otherwise great tournament. 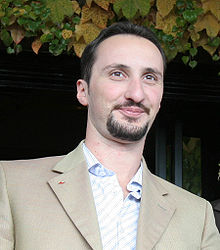 Veselin Topalov celebrated his 38th birthday yesterday.
ANYWAY, all the games were drawn yesterday, none of the players wanting to take any risks and all playing very solidly.  I find no fault with this strategy at the beginning of an important event. Things will heat up soon enough…

Probably the most exciting of the above mentioned games was between Grischuk and Ivanchuk.  After 41 moves an interesting King and Pawn ending arose…
gm  GRISCHUK

gm  IVANCHUK
Black has connected passed pawns on the Queenside and the first impression is that he has chances…but Ivanchuk quickly got his own majority on the Kingside going and the game was soon drawn.  Neither side can do anything… 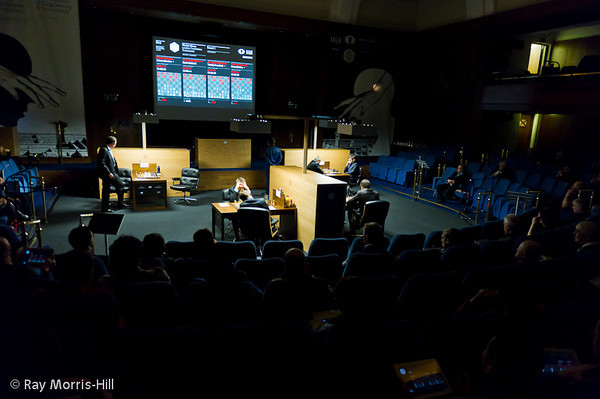 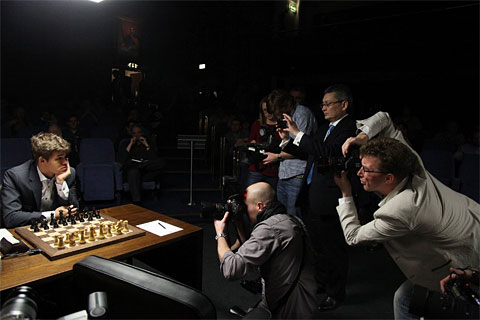 World number one rated player, Magnus Carlsen, has a LOT of pressure on him in London.  Can he live up to expectations?  Certainly the number one tournament player in the world today, Carlsen finds himself in a prickly situation where he has nothing to win and EVERYTHING to lose!  If he does not win in London then many will write him off…

My money is, once more, on the Russian star Alexander Grischuk.  The only poker-player of the whole lot, Grischuk’s style of play and over the board bravo is capable of producing surprising results.  Will he pull it off?  Bets are on…
—————————————————————————————
SURPRISING SOVIET MINIATURES 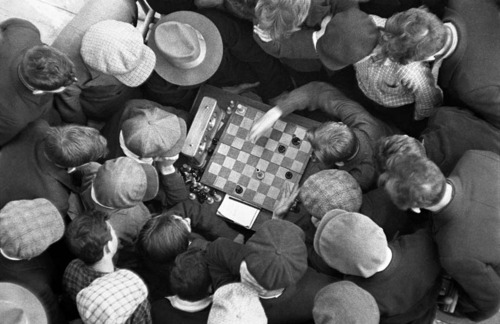 Travelling to Barcelona yesterday, I started to take a close look at a data-base of games from old Soviet championship finals and the respective qualifying championships.  Slightly less than 10,000 games in all.  I am not sure where I got this data-base from, but I have had it for about a decade.  The games date from 1920 (when Alekhine participated!) to the last Soviet championship in 1991, right before the breakup of the Soviet Union.

Really I was looking for new blog material.  Ofcourse, the more famous games I was already aware of, most of them having already found their way into best-games collections of one sort or the other.  BUT I quickly realized that this data-base was not only a mine of rich games but also contained some  surprisingly weak games.

Many games are less than 19 moves long!  Which makes sense, when you think of it, as the Soviet-style championships (and their qualification events) were actually proving grounds for several generations of grandmasters.  Players such as Botvinnik and Petrosian, for example, experienced difficulties at the beginning,  jumping from strength to strength before finally become world-championship contenders.  The Soviet School, as it became known as in the west, was the best and toughest training ground that any player could hope for…

I quickly came across the shortest loss by Petrosian (13-moves!!)  What is particularly surprising about this loss is that Tigran was already a mature player (aged 20) when it was played, but I suppose he was just having an off-day.  (Everyone is allowed an off-day from time to time…) 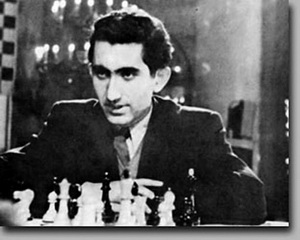 ————————————————————————
Another surprisingly bad game between GREAT players is the one below. Difficult to explain White’s play, and not so hard to understand the final position where he resigned!

Looks like ‘amateur vs master’.  Had White ever heard of ”development”? Both players were strong grandmasters at the time!

Igor Bondarevsky    became a well known trainer (Spassky) and world renown parapsychologist.  He was born in 1913

V. Ragozin was born in 1908 and died relatively young.  His name graces one of the most popular lines of the Queens Gambit.
Share