From St.Louis just his week.  Position after 21 moves of play.  With energetic play Raja has developed a strong initiative.  The extra Pawn for Black is irrelevant at this point of the game as Black’s development is less than ideal.  White finds a clever idea to exploit the awkward position of the Black Queen. 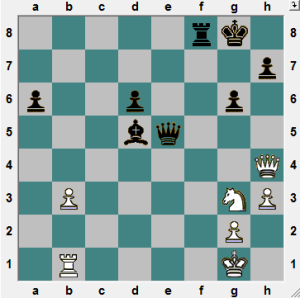 St.Louis.  Position after White’s 31st move.  White is in a bad way,  a Pawn down and his forces disorganized.   Black shows skill and artistry in putting White quickly out of his misery.

St.Louis.  Position after White’s 28th move. White has been outplayed since the opening and now–for his sins– his King is going to take a short walk to the gallows…

BLACK TO PLAY AND MATE IN FOUR!