http://www.fgajedrez.org/open-de-san-sebastian/
This time of the year usually sees me participate in the traditional open tournament in San Sebastian.  I like the city very much and the tournament is always a tough affair with about a dozen grandmasters or so.  This year–the 34th edition–the organizers have invited as guest of honour the 80-year old legend Viktor Korchnoi.  The event has a total of 174 players from 26 countries.
The reader can follow the games at this link:   http://www.fgajedrez.org/directo/

Another Canadian is also participating: IM Leon Piasetski.  Leon also participated in last year’s edition and liked it so much that he decided to return!   I will  post some pictures of the event, along with some of my games.  You can also take a look at the link above for a short interview with Korchnoi , amongst other things.
My game yesterday was not quite the typical first round affair.  I was paired against a master level player (but only rated 1999 today because he hasn’t played for years–he had taken up ball room dancing in the meantime!).  The game was naturally a tough fight; I got almost nothing from the opening and only later in the middlegame did I get something going when my opponent allowed me to get in f4 (he should have prevented it with an …h5 a few moves earlier).
POSITION AFTER 32 MOVES

GM   SPRAGGETT
33.f4!
White built up a strong initiative against the Black Kingside.

Capablanca (seated in the centre at the closing dinner) won the tournament in brilliant style, losing only one game–to the great Aikiba Rubinstein.  Curiously, several of the players objected to Capablanca’s participation in the star-studded tournament (!) because he was unknown at the time.  So Capa played  some blitz games  and wiped the floor with them—they soon stopped objecting! 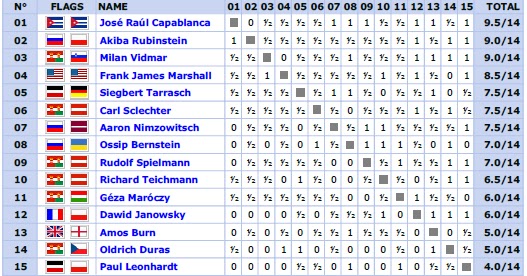 
Contrary to popular belief, the tournament did NOT take place at the Grand Casino, but instead at the hotel where the players were lodged.  Today this hotel no longer exists, being torn down for a museum and cultural centre!
The tournament was held from February 20 to March 17, 1911. The prizes were: first – 5000 Francs, second – 3000 Francs, third – 2000 Francs, fourth – 1500 Francs. Non-prize winners will receive 80-100 Francs per point.

The brilliancy prize from Baron Albert Salomon von Rothschild on 500 Francs was won by Capablanca for his game against Dr. Bernstein:
POSITION AFTER 27 MOVES

CAPABLANCA
Capablanca , after some speculative play on the Queenside (chucking a couple of pawns) broke thru with the very pretty
28. Nfxg7!!

Here Capablanca finished off his opponent in great style!  29.RxB!  Qf8!? (Black can not take the Rook because of a back-rank mate) 30.Qxg7-ch!!

NIMZOVITCH
In this game Nimzovitch had over zealously sacrificed a piece, no doubt wanting to teach the young Capablanca an important lesson (!) in humilty.  Clearly Capablanca was not impressed and in the diagram above the Cuban has a completely winning position.  Capablanca finished off his opponent in great style: