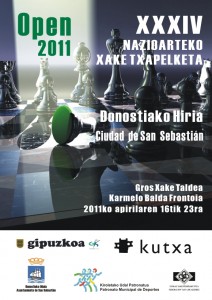 A quick draw today, in just 20 moves.  Normally I don’t subscribe to such draws in the early rounds of the tournament, but circumstances got the better of me, and in a sense I was quite lucky that my opponent agreed to the draw, because I was in considerable pain at that point.

About 4 hours before the game I ate several tuna tapas and after one hour of play my stomach began to ache.  Soon I found myself spending more time in the washroom than at the board.  When I realized that I might have food poisoning I offered a draw (which was kindly accepted) and then spent the next few hours in bed, trying to just sleep it out.
About 10pm I felt a bit better and went to have a bite with Leon Piasetski and Sam Collins.  By 11pm I was back in my room vomiting and suffering from stomach pains.  I tried to hold out and bite the bullet, but by 2am I could not take it any longer and went to the Donostia Hospital.  (Enroute to the hospital, I had to ask the taxi driver to pull over to let me vomit!)
In the hospital I was treated very attentively, having a blood test and urine test just to be safe.  I also was put on antibiotics, and soon I was feeling much better!  I stayed around the hospital for several hours waiting for the test results, half dressed in typical hospital garments!
Fortunely, it was only food poisoning, and the test results came back without any major surprises.  I was subscribed some medication to take over the next few days. Anyone who knows me would realize that it takes a lot to get me to go to the hospital (I hate them!), but I was completely desperate and in considerable pain.
It is now 5:30 am and I will soon hit the sack after ending this blog article.
___________________________________________________
FINAL POSITION
GM  COLOVIC

GM  SPRAGGETT
The game is balanced but complicated and messy at the same time.  My threat of Ra7 probably requires Colovic to respond  21…Ra8.  After the exchange of Rooks White should follow up with g5, gaining counterplay on the Kingside.  Black’s threat of playing …d5 should keep things undercontrol.
However, this is the kind of position that I have played all of my life.  The better player usually wins (or the player who happens to play better on any given day) and the fact that the chances are roughly equal does not limit White’s winning chances.