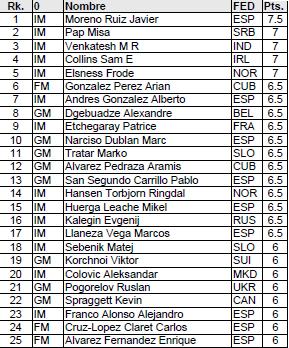 Curiously, Ruiz’ result was not good enough for a GM norm on the technicality that he did not play the mandatory 3 GMs!  The 40-year old , however, has been making steady progress in the past year and he should soon become a GM in fact.  He has won close to 100 rating points in just a bit more than a year…
The San Sebastian tournament was run with the usual high-level of professionalism that we have all come to love and expect from this part of Europe.  Everyone enjoyed the tournament and– from what I could gather at the closing ceremony–will come back next April for the 35th edition!

As for myself, there is not need for much in terms of excuses.  My 6 points was probably my worse result here ever (though I will have to check when I get back home!), but I must point out that the legendary Viktor Korchnoi did not get more!
However, my tournament effectively ended when I came down with food-poisoning (the 3rd round).  I briefly visited the hospital here in San Sebastian and was put on medication.  The next round everything appeared to under control–as I won (!) in just 25 moves with Black against a strong French master–but from then on it was down hill all the way!
The medication had a sort of  ‘out of body’ effect on me and I soon found that some of my more valuable chess skills were reduced or eliminated all together: especially my sense of danger and intuition.  It was suggested that I simply withdraw from the tournament and go home, but I did not feel that my health was in any great danger.
My single loss to the Cuban master Perez from a very good position with the Black pieces came down to a one-mover when I did not even realize that he had a threat!
Though all of my opponents were impeccable  gentlemen, probably sensing a wounded prey they seemed to play better than usual against me…especially my round 8 opponent from Germany (Roman Krulich–2250 FIDE) who navigated a very complex middlegame to reach an ending where he had the slightly better of a probable draw.
I tried to win but only found myself in trouble and had to find an ingenious manoeuvre to be able to sacrifice a Bishop for a dangerous pawn that was threatening to give birth to a new Queen.  This gave me excellent drawing chances and soon the game was for all intent and purpose a dead draw:
POSITION AFTER WHITE’S 68th MOVE
SPRAGGETT

KRULICH
We were down to playing 30 seconds a move, but the position does not present any great difficulty for either player.  Both players knew the ONLY logical result was a draw (Rook and Knight against Rook –even without the pawn–is won only once in a million games).
But here some strange circumstances came into play.  Roman–a gentleman in every sense–did not want to offer a draw as he had made an earlier draw offer soon after the opening and he felt that it was unsportsmanlike to make 2 consecutive draw offers!  As for my side, ofcourse I would have accepted any draw offer on Roman’s part–but it never came.  And since I follow the code that one should generally not offer a draw when one is down material (perhaps the opponent wants to try to win), no draw offer came from me either.
No doubt the spectators must have thought we were both trying  to win!  But as the reader can verify, the Black pawn can simply not advance without being lost.  Somehow my opponent started to get nervous with the 30-second increment and began to get annoyed when his pen stopped writing.  This lead to him several times almost exceeding the time limit (even though I never threatened anything).
As a result, by some miracle Roman allowed my pawn to advance to the 2nd rank and by move 80 the following position was found on the board:

White finds himself with his Knight trapped!  Even so, after 81.Rxg2-ch!  KxR  82. Ne2! the ending is a well known theoretical Rook vs Knight draw!   Roman’s face  by this time was quite flushed and even though he knew he had to take the Pawn with his Rook, he played 81. Ke4 ?? (After the game he found it difficult to explain this–competition sometimes is crazy!)  After my 81…RxN–for the first time in the game–I have the advantage and a winning advantage since the pawn is unstoppable.  Roman resigned one move later.
Hard to believe, but true!
________________________________________________
As a result of this little episode, in the last round I found myself on 6th board playing the Spanish  IM  Huerga ( one of Spain’s brightest young hopes), right next to the board where Viktor Korchnoi was playing!  (At least my tournament was ending with some degree of dignity–or so I thought)
POSITION AFTER 27 MOVES
HUERGA

SPRAGGETT
Before the game I decided not to take my medication so as to avoid the side effects.  Things worked out very well for quite a while–I had a very strong edge by move 20 or so–but then I found it necessary to take my medication as I was beginning to feel very uncomfortable in the stomach region.
By move 27 I found myself a pawn up, with a large positional advantage (above).  Here 28.Qc1 (threatening 29.Qc7) would have been very strong.  Probably Black is dead lost.
Instead, and since we were both very short on time and needing that 30 second increment, we both played inexactly as I tried to create mating threats around the Black King.  I let Huerga’s pawn advance to b2 (!) and perhaps I was even lost for a move or two….but in the end I managed to survive to a drawn Queen and 2 Pawn versus Queen and Pawn ending.   We both played on til about move 80 before it was evident that all of the pawns were about to be exchanged.
I will post the game during the week!
_____________________________________________ 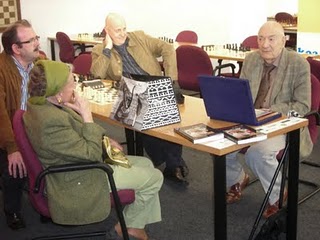 Petra, Korchnoi, Garcia Leontxo (journalist) and unknown
As I said, the tournament was enjoyed by all (even yours truly–despite everything) but for me it was special because of Viktor Korchnoi’s participation.  I had not seen Viktor for a few years now and I was curious to see how he was at age 80…
I first met Korchnoi some 25 years ago or so.  I was pleased to see that he still plays very high level chess, but could not help but notice that he no longer has the stamina to play more than 3 hours with full energy.  As a result, he often loses his advantage…I am certain that his 6-points did not please him (he played a Dutch defence in the final round–the Stonewall system (!) but only drew)…no doubt he drew little conciliation that his 6 points was equal to my own score (!) and I am only 56.
Viktor no doubt will still be playing chess for atleast the next years, but his physical condition seems a bit more frail that I remember it.  Today he often uses a walking stick …but other than that Viktor will always be true to himself:  a real chess legend!
Share