Every year those nations that have  common Spanish or Portuguese  roots participate in the IberoAmericano Championshp.  The tournament has become a very strong event that includes the best players from Cuba, South and Central America, Mexico ,Spain and Portugal.  This year the event was held in Quito, Ecuador and the format was unusual: there were preliminaries and then 4 final sections, with the top section seeing Spain’s  up and coming superstar Ivan Salgado take first place after a dramatic last round victory over Granda. 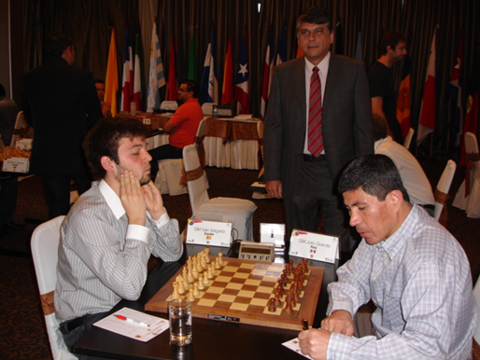 The decisive game of the championship was in the last round, which saw Ivan paired with White against gm Julio Granda.  Granda played the Black side of a Spanish and did not want to take any chances, playing solidly.  If Granda could draw the game, then Salgado would finish in 2nd place and Granda would win the Championship!
HOWEVER,  Granda slipped up when , perhaps over confident, he allowed one too many White piece around his King.  Salgado did not let the opportunity go to waste:
POSITION AFTER 27 MOVES:
gm  GRANDA

gm  SALGADO
It is a curious thing about White’s light-square Bishop in the Spanish opening: even though it seems to play no active role for most of the game, it often scores the winning goal!  Here White’s Bishop on b3–seemingly dead– will actually win the game!
How, you ask?  Just watch and learn!
28. Nxf7!!

A brilliant and beautifully calculated conception that works like a charm!  In principle, Black should never allow so many pieces aimed at his King: those that seem to do nothing are often useful to sacrifice to rip open and weaken the monarch’s defences…and the others do the rest of the work!
For the sake of dotting all the ‘i’s and crossing all the ‘t’s, Black can not take the Bishop on b3 here:  28… Nxb3 29. N3xe5! Qe6 30. Nxh8! wins easily enough.
28…Kxf7   29. Bxf6!

It looks as though White is just a piece down for nothing!
31. Nh4!!

A very difficult move to forsee!  The threat of mate forces Black’s hand, while the Rook on e3 suddenly comes into play
31…Bxh4   32. Rf3 Bf6

There was no use in trying to slow the attack by interposing with the Queen on f6: White simply would take the Queen with check , then take the Bishop on d7 (!) and follow it up with c5! (opening the diagonal for the Bishop), winning easily enough.
Even so, after the text move, Black seems to have everything under control!  And don’t forget that Black is 2 pieces up….
33. Rxd7!!

The long dormant Bishop awakes and Black can no longer escape his fate…Granda tries his best for a couple more moves, but the battle is already decided.
34… Re6 35. Bd5! Qa6 36. c6!

[1:0]
Nobody likes to resign a Rook and a piece ahead, but Granda’s decision is sound and probably best!  To avoid the immediate mate, he must play 36…Qxc6, but after 37. BxQ  RxB  38.Qh8! followed by taking the Rook on a8 it is White who is a mile ahead in material!
A beautifully executed attack by Salgado!