The 8-player Russian Championship ended earlier today and saw Svidler crowned for the 6th time as Russian Champion. Congrats!  He took home a cool 24,000 euros.  Morozevich finished clear 2nd  a half-point back with 4.5 points. That was worth slightly more than 17,000 euros.  The time control was 40 moves in 90 minutes and then 30 minutes to finish (with 30′ per move).

Curiously, Svidler had already won the title the round before and could even afford to lose against Morozevich in the final round (which he did).  Svidler played good solid chess and was always able to find ways to keep the game interesting.  In essence, his victory was due to taking advantage of the opportunities that his opponents gave him.

I suppose that Kramnik was disappointed with his result (2 losses and 3 wins), but in such a short tournament as this it is almost impossible to recover from early losses–Kramnik lost 2 of his first 3 games!  Karjakin, Grischuk and Kramnik tied for 3rd thru 5th with 4 points each.

Svidler’s  win over Nepomniachtchi (phew!) in the penultimate round  secured his title.

I suppose it is easy to make excuses for Svidler’s last round loss (lack of motivation, too much celebrating the night before, etc) but Morozevich deserves great credit for making it look easy!  In a topical line against the Grunfeld defence, White plays a novelty on move 13 and soon found himself in a better ending.

The final game by Kramnik must have given him some pleasure , as he made a speculative –but very interesting– piece sac right in the opening and was able to carry his initiative for the rest of the game. I am not certain of the soundness of Kramnik’s conception, but fortune often favours the brave.
In the position above (after Galkin’s 32nd move :32.Ba6)  Kramnik has a really nice shot to finish the game.  Do you see it? 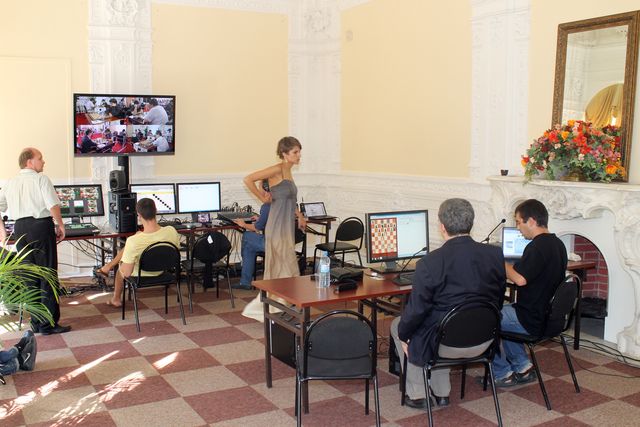 The internet coverage (as well as the Russian media) for the championship was excellent, offering live analysis, interviews and easy access to virtually every aspect of the event.  The tournament site was the Botvinnik Chess Centre (the old Moscow Central Chess Club). 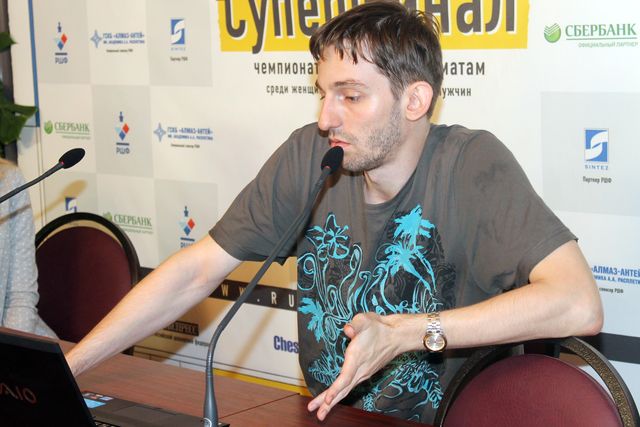 Grischuk explaining why his new t-shirt did not bring him much luck in his game with Kramnik in the penultimate round!  (He drew it) 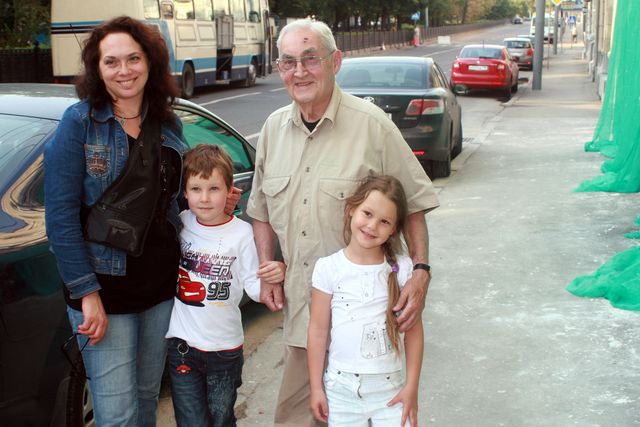 Celebrity visitors to the championship:  Mark Taimanov (age 85) and his wife Nadya and their twin children standing outside the chess club.  Nadya is the daughter of GM Averbakh and is considered one of the most beautiful women of her generation.  It is said that when she was a teenager her ambtion was to seduce every single GM in the Soviet Union…ofcourse, in those days a GM actually meant something more than today!  In anycase, naughty rumours have it that she achieved her ambition… 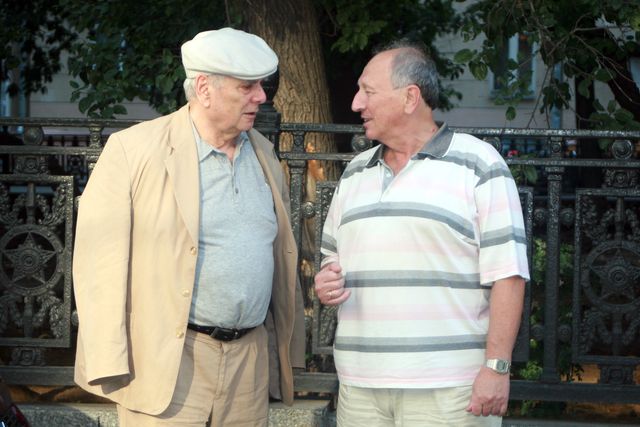 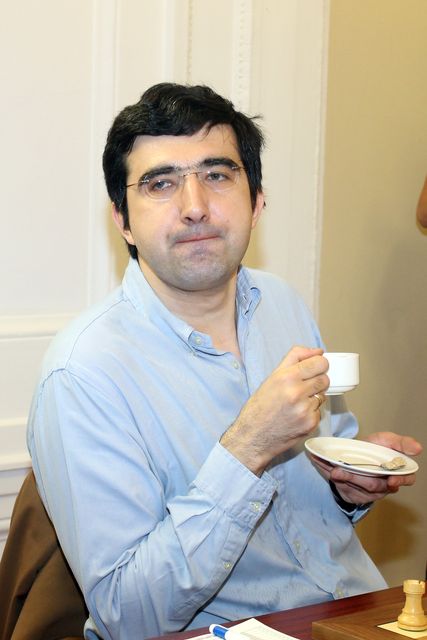 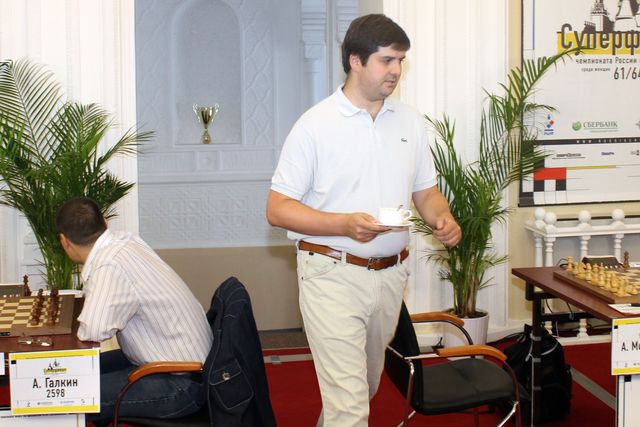 Svidler, not to be out-done in the coffee department! 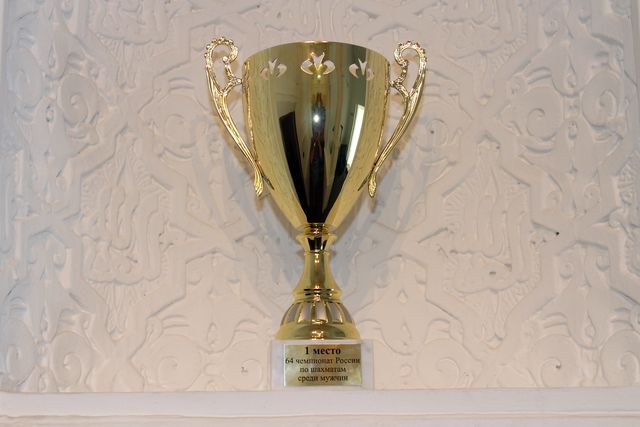 I would have expected a diamond and ruby embedded trophy for the championship winner!  Instead, this cup looks like some cheap relic that CMA hands out at its events! 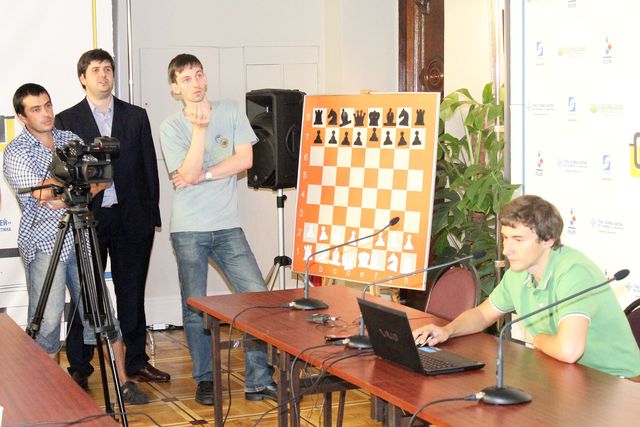 Karjakin (sitting) explaining his game to the spectators.  Svidler and Grischuk watch the screen directly infront of them. 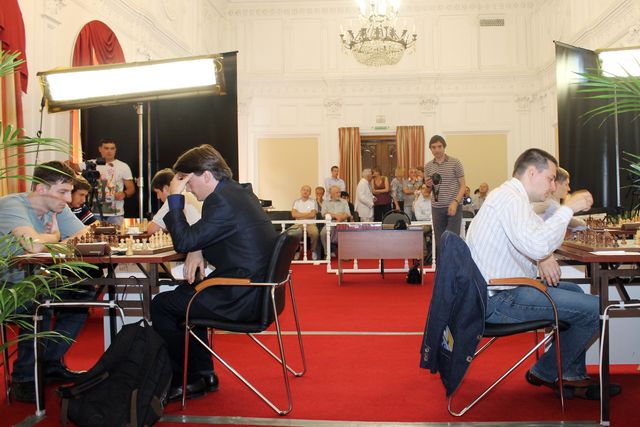 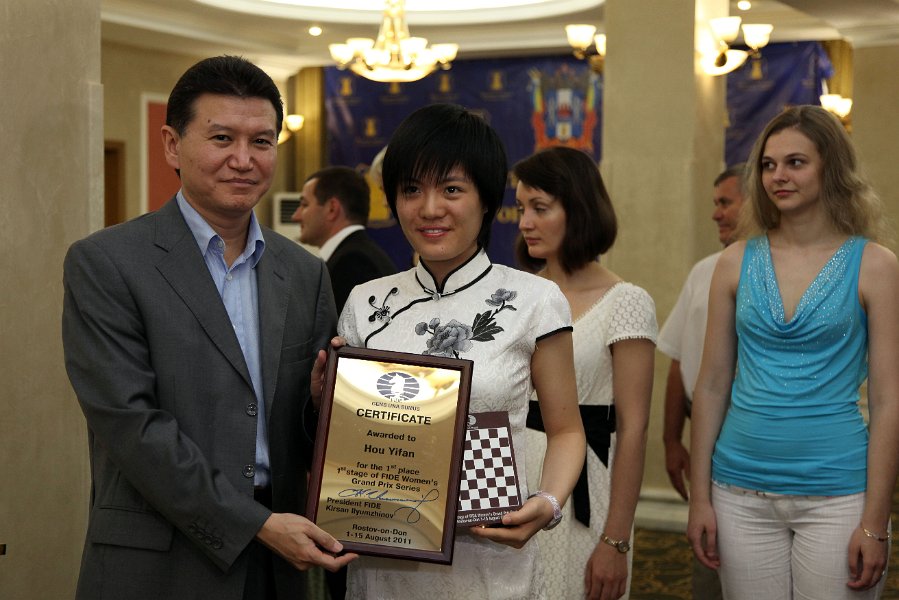 FIDE president Ilyumzhinov  presenting 17-year old  world champion Hou Yifan with first prize in the Gran Prix tournament in Rostov.  Notice that he is not wearing a tie (reference to the closing ceremony at the British Championship last weekend!) 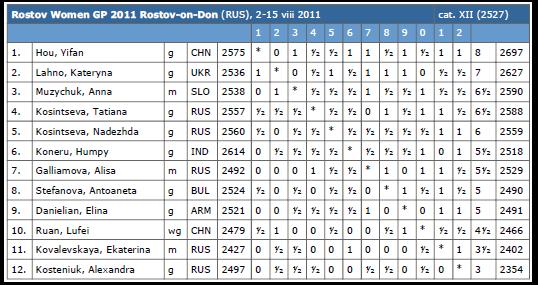 Sometimes having no tie is better than having  that  tie!

That hurts just looking at it! 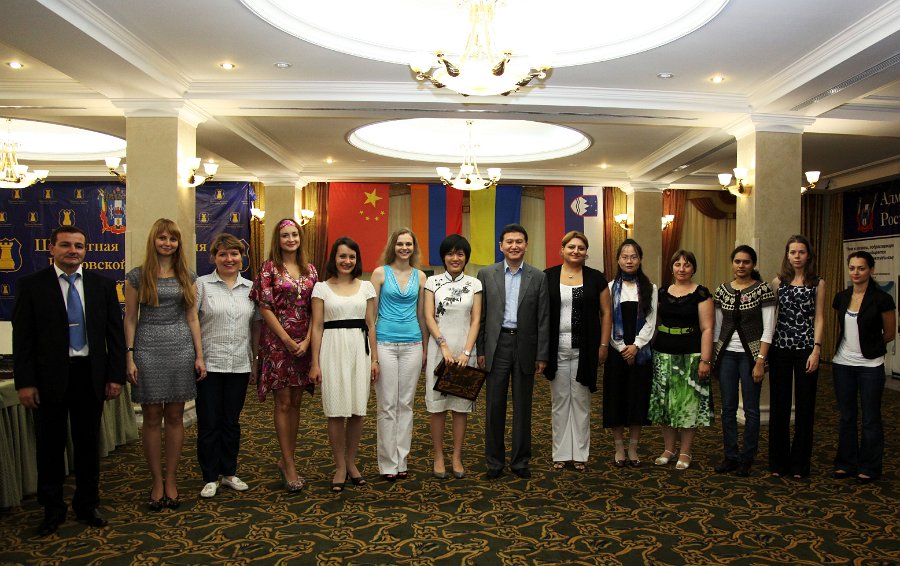 The tournament is over and now everybody can go home!