Toronto GM Mark Bluvshtein faced the strong Russian GM  Alexander Riazantsev in the first round with the Black pieces.  Not an easy task by any means, especially as Riazantsev has been showing signs of improving in recent times. 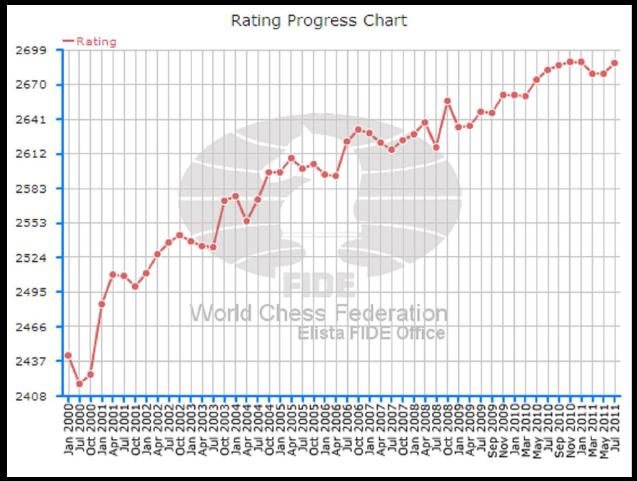 Alex, born in 1985, is no stranger to Portuguese players, having played for several years in the 1st Division Team Championship.  We played on the same team  Diana (Evora) when we won the championship in 2008.  Riazantsev is a serious student of the game and has been working very hard to crack into the 2700 club.
POSITION AFTER WHITE’S 19th MOVE (19.a5):
GM   Bluvshtein

GM  Riazantsev
A super sharp line of the Queens Gambit Accepted (QGA) with opposite side castling, clearly indicating the ambitions of both grandmasters.  The question is whether Black has enough compensation for White’s bishop-pair.  In my assessment of the position, Black must not under any circumstances break his blockade of the d-pawn.
I think that 19…a6!, stopping White’s Queenside expansion,  would keep the game unbalanced.  If then 20.  Na4 !? then the active 20…Rg4!  21.Nc5  Qd6 would be correct.  With the possibility of counter attack with …Nc6 in the air, Black would very much be in the fight.
INSTEAD, Mark chose a different plan (and weaker ), involving surrendering his blockade on d5.
19…Nxc3 (?!)  20.bxc3  Be4  21.Re1  Bd5  22. Rb1  Nf5

Alberta’s Eric Hansen must have had no illusions about what he was facing as he sat down to play super-GM Gashimov in his first appearance at a world class knock out championship.  One of the lowest rated players in Khanty Mansiysk (FIDE rated 2449), the 19-year old Canadian is there to learn, gain valuable experience and to have fun at the same time.
His game today was a chaotic affair where both players sought complications right from the start:
GM   Gashimov

IM   Hansen
Gashimov, a big fan of the super-sharp Benoni Defence, has just played 11…g5, allowing his Knight on e5 to set root.  The negative side is that he weakens his Kingside.  However, all Benoni players feel that the plusses outweigh the down side.  In praxis , they are right most of the time…