Quotation of the day

You have to hand it to former Italian prime minister Silvio Berlusconi when it comes to showing class while living up to his rich playboy image.  The billionaire is in yet one more trial, this time for allegedly paying for sex with minors at his famous ”bunga bunga” parties. Prostitution is legal in Italy, but paying for sex with minors is not.  Last week he showed up at this trial (curiously, under Italian law it was not necessary) to give moral support to some of the girls/women called as witnesses.

Karima El Mahroug, was 17 years old when she got involved in the sex scandal.

According to the Guardian (LINK):

”He was speaking to reporters outside a court which had heard earlier this week that two of his young women guests had performed a pole dance while wearing – and subsequently not wearing – nuns’ habits. Leaks from the inquiry have also alleged there were stripteases by showgirls in skimpy police uniforms.
Berlusconi confirmed that some of his young female guests at his mansion near Milan had indeed dressed up as policewomen, but only for the purpose of “burlesque games”. He insisted that he had hosted “only elegant dinners, and after dinner sometimes we went down to the theatre, my children’s former discotheque, where there was an atmosphere of good cheer and affection.”
Berlusconi also took advantage of his day in court to explain why he had paid large sums of money to some of the women who are due to testify. He said he was giving financial support to all his former guests “because they have had their lives ruined by this trial”.

He added: “Some of them have lost their boyfriends, and perhaps they’ll never again find another.”
It was reported that Berlusconi, one of the world’s richest men, had given a total of €127,000 to three women including his former dental hygienist, Nicole Minetti. A regional lawmaker for Berlusconi’s party, Minetti is a key figure in the case.”

”Girls…women are by nature exhibitionists.” 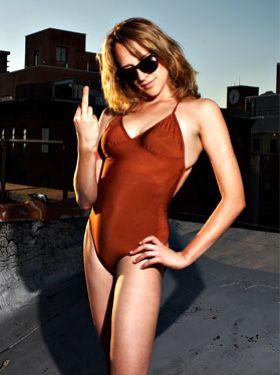