The Quarter Finals begins tomorrow afternoon with just 8 players remaining of the original  128-player elimination event.  The pairings are below.  Each match will see 2 regulation time games , followed by tie-break games (if necessary).  My understanding of the tournament regulations is that 3 of the 4 players who get beyond this round will automatically qualify for the next Candidates Tournament. 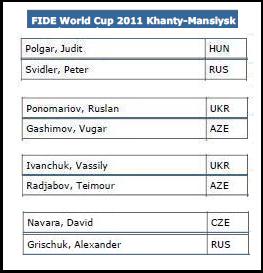 WHO ARE THE FAVOURITES AT THIS STAGE?
Not withstanding that the level of chess  witnessed in the endings is becoming something of a joke (see the diagram below that saw Potkin get eliminated in an elimentary King and Pawn ending) , regardless of whether it is at the regulation time controls or the faster tie-break controls, we can still expect to see some pretty interesting play in the middlegames.
GM  Grischuk

GM  Potkin
Potkin has been having a great tournament up to today, and having drawn the first tie-break game he finds himself in the above position with just 2 minutes remaining on his clock.  As a few moments of thought can easily show, 48.b5! draws, despite Black having the protected passed e-pawn.
HOWEVER, Potkin cracked with the imprecise 48.Kb3?, which loses by force.  Grischuk did not need to show any real skill in winning…it is just about as simple as counting your fingers and toes and making sure that you have 10 of each!
And so yet one more GM is sent home for reasons that really have nothing to do with chess!  Blame it on the clock, blame it on the rules, blame it on FIDE…or just blame it on the players for accepting to play with such silly regulations in the first place!  In any case, 100 years from now people will look back on this period of time and –seeing such elementary mistakes–draw the logical conclusion that everyone was weak!
MY CHOICES for the Quarter Finals are as follows:
Svidler over Polgar; Ponomariov over Gashimov; Ivanchuk over Radjabov; and Grischuk over  Navara.
Share