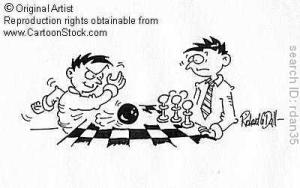 In keeping with this week’s trend to show how utterly gross and criminal we chess players can be when push turns to shove, I present here a wonderful (and true!) story of poor sportsmanship during a game of chess

CHECKMATE!
Angry chess player throws rival out of the window

24 April, 2009
The court in the Russian Republic of Udmurtia has sentenced to a man, who was so upset to lose a chess match that he threw his opponent out of the window, to six years in prison, Infox.ru reports.
The incident occurred in the Udmurtian city of Glazov in December 2008. 43-year-old Aleksey Valentikhin came to visit his erstwhile friend – a 60-year-old pensioner, who lived nearby.
The two were playing chess, and it appeared that the old man was more skilful at the game. After several losses in a row, Valentikhin completely lost his nerve and attacked his rival, throwing him out of the window.

The pensioner fell from the second floor breaking several bones and damaging his lungs. He later died in hospital. When Valentikhin realized what he’d done he contacted the police himself.

What is this? Only six years in prison for killing your chess opponent? This is even worse than the 10 years given to the man who choked his opponent to death (story last Thursday).