Who was it that said that we have to protect our children from the negative influence of today’s TV and raunchy music videos?  Well, it seems that even adults  are not immune…
This stuff is too good  to make up!  An American couple who had been invited to a wedding got into an argument.  The woman–who had just a bit too much to drink–hit her husband and then locked herself in her car.  When the police arrived, she squirted them with her lactating breasts.  She was promptly arrested and charged.  The story is big news in the US this week.

Woman becomes hit on the internet, but might go to jail
LINK
Woman sprays police with breast milk
(Reuters) – A lactating U.S. woman was arrested and charged with disorderly conduct after she sprayed sheriff’s deputies with breast milk as they tried to remove her from a vehicle, police said on Monday.

Ohio-resident Stephanie Robinette, 30, was arrested and charged with domestic violence and assault linked to a domestic dispute, as well as resisting arrest and disorderly conduct, according to the Delaware County Sheriff’s Office.
It said Robinette’s husband told authorities the pair had been attending a wedding when his wife got drunk and started a dispute. He said that she hit him multiple times before locking herself in her car outside a banquet facility on Saturday.
Sheriff Walter L. Davis III said that when police approached the car to speak to her, she yelled profanities and refused to get out.
“When deputies attempted to remove Robinette from the vehicle she advised the deputies that she was a breastfeeding mother and proceeded to remove her right breast from her dress and began spraying deputies and the vehicle with her breast milk,” Davis said.
Robinette was later removed from the car and arrested after more deputies arrived on the scene.
“This is a prime example of how alcohol can make individuals do things they would not normally do,” Davis said. 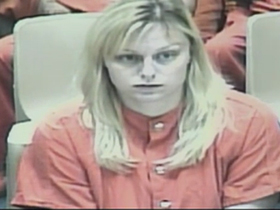 Could your breasts be a deadly weapon?

Armed and loaded?
Joking aside, this is no laughing matter!  A well-endowed woman can (deliberately) cause traffic accidents and even suffocate unsuspecting men.  In at least one state (Texas) a court has ruled that  exposed  breasts as ‘deadly weapons’! 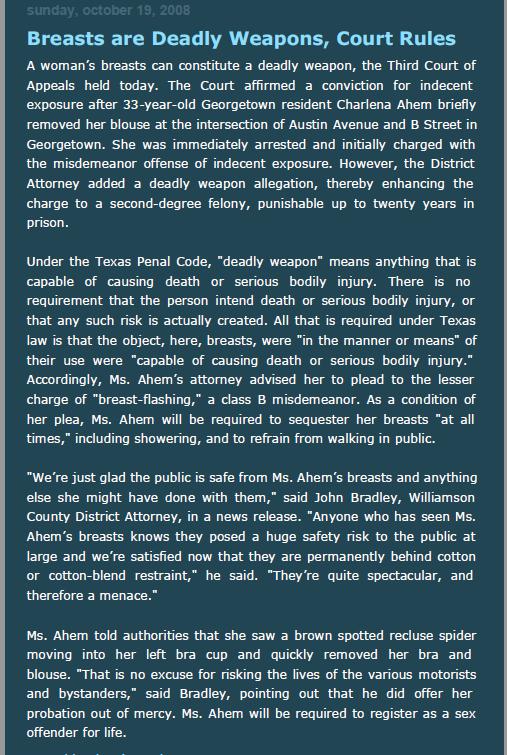 And there are numerous examples of over zealous women maiming or even killing their spouse with their breasts!

Claire Smedley, a 27 year-old British woman, almost killed her boyfriend. She didn’t nearly end his life because he was cheating on her or anything to that effect, but instead was close to suffocating him with her ginormous breasts (40LL to be exact) while in bed.  LINK
MORAL OF THE STORY:
IT’S A LOT MORE  DANGEROUS  OUT THERE… 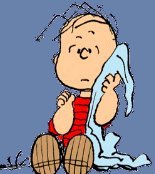 …THAN OUR  PARENTS  LEAD US ON TO BELIEVE!