Now here is a disease that I would not wish on my worse enemies! (Not enough suffering…)  Imagine… the man woke up in the morning and noticed that there was a small sore on his leg…within hours he was dead!  The doctors could not do anything!

A day earlier, Montague, a father of two young children, noticed a small sore on his leg, and within hours fell unconscious.
He had emergency surgery to remove the skin around the sore and was put on life-support, but died the next night.
Montague had necrotizing fasciitis, a rare but severe bacterial infection that can destroy muscles, skin and tissue and is spread only through direct contact.
Union leader at Chrysler plant
Montague was an autoworker at the Chrysler minivan plant, where he also acted as union steward for the Canadian Auto Workers for seven years. 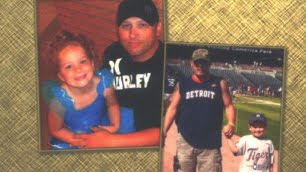 “He was the type of guy when he walked into the room he smiled, everyone smiled,” said Rick Laporte, president of CAW Local 444. “A young healthy guy, [it] really caught us off guard.”
Montague was a pitcher in a local baseball league and had been otherwise healthy.
Laporte said Montague’s death leaves a void in the union, where the young father was thought to have a future as a labour leader.
“His members will tell you he’s probably one of the best representatives they’ve had in their time,” said Laporte.
“I think that was really what he was all about, was trying to help people.”
Laporte told CBC News the union will raise money for the education of Montague’s two young children, Madison, 6, and Braeden, 7.
The Public Health Agency of Canada estimates there are between 90 and 200 cases of necrotizing fasciitis per year in Canada, with as many as 30 per cent of those cases resulting in death.
Symptoms of flesh-eating disease include:

• High fever.
• Red, painful swelling.
• Swelling feels hot, spreads rapidly.
• Swelling sometimes starts at cut or bruise.
Group A streptococcus is one of the bacteria that causes flesh-eating disease, and is the same one that can cause strep throat, impetigo, scarlet fever and rheumatic fever. 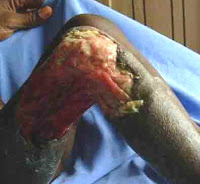