On alcohol and chess 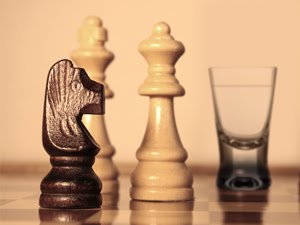 You can not run away from alcohol: it is everywhere.  One of the world’s biggest and most lucrative businesses.  They tried prohibition for a short while, but all it did was create super-rich families like the Kennedy’s and the Bronfman’s.  Alcohol kills more people than drugs, but only drugs is illegal.  You go  figure that out.

But there is nothing wrong–nor dangerous– with moderate drinking.  The young have to be taught to choose wisely, however.  Social pressures often escalate and the addictive qualities of alcohol soon set in.  The best is to get some guidance…and to use a sober head to make your choice.
In the chess world alcoholism is a big problem.  I have already written several blog entries about this (Check this  and this).  Numerous world champions suffered from severe alcoholism: Alekhine and Tal come readily to mind.  Sometimes Tal had to be carried away from his game because he was so drunk!  Some say that Alekhine lost his world title to Euwe in 1935 because he drank too much…though I think this story is exaggerated (Euwe played better chess!).

The pressures of tournament play build for hours without any opportunity to release stress.  In tennis there are ample opportunities to release steam, but chess is not a physical game in that sense.  That means that chess players often release their stress after the game….often by going to a pub and relaxing.  One drink can lead to a second…we all know the dangers.
Fortunately, most of the top young players in the world have already come to the right decision: chess and alcohol do not mix very well.  The pressures of top level chess do not forgive anyone who does not get a good night’s sleep and a healthy lifestyle.
For this reason it is interesting to see what Kramnik has to say about alcohol and chess.  Apparently , when he was still a teenager, he experimented (like everyone else!) with alcohol….and found that it was not for him:

”…It seems to me that alcohol intensifies your sense of reality in a slightly different way.  It doesn’t sharpen you mental activity, I can say that for certain.  I’ll even honesly admit that during my wild youth (from about 18 to 19) for the sake of an experiment I tried playing a couple of times while under the influence.  Purely as an experiment.
I wanted to understand how it would affect me from the scientific point of view.  And I did not like it at all.  There was a sensation of absolute dullness, lethargy, my head did not work as well.  I didn’t have any brainwaves…It is clear that alcohol isn’t an aid for a chess player.”
Link to interview
_________________________________________________
[youtube http://www.youtube.com/watch?v=bRGqy_1Lvkg]
SPRAGGETT ON CHESS
Share