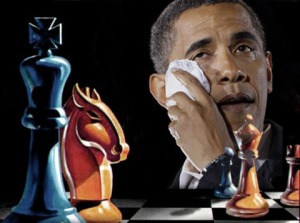 Obama wins world chess championship
http://www2.hernandotoday.com/content/2009/oct/24/obama-wins-world-chess-championship/#
By A. BARTON HINKLE
Guest columnist
Published: October 24, 2009
The World Chess Federation today announced that Barack Obama had become the world chess champion, nudging aside former undisputed champion Viswanathan Anand of India.
The news surprised some in the chess world, because Obama has never participated in tournament play. But FIDE officials said they felt certain Obama could become world champion if he ever decided to try.
Others were less surprised. Hungarian grandmaster Judit Polgar noted the world championship is just the latest in a string of triumphs for the American president. She cited his receipt two years ago of the Nobel Peace Prize. That award — for which Obama was nominated just a few weeks into his presidency, and a mere five years after he held the title of state senator in Illinois — was only the first in a series of accolades to come his way. 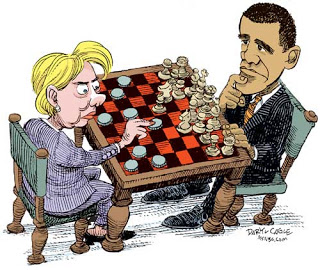 It was followed several months later when the International Mathematical Union bestowed on Obama the Fields Medal, often referred to as the Nobel Prize of Mathematics. The Fields is supposed to be given to individuals not over 40 years of age. The prize committee decided to waive the requirement, said the IMU’s László Lovász, because some members had seen a “60 Minutes” interview in which Obama had done a rough percentage calculation in his head, and were impressed.
“Besides,” Lovász added, “the Fields is intended in part to encourage further achievement. Having accomplished so little in the area of advanced mathematics, [Obama] surely has nowhere to go but up. We feel very optimistic.”
In December, Obama was named the Ultimate Fighter by the Ultimate Fighting Championship. According to remarks by UFC president Dana White, there was no need for Obama to step into the Octagon. “He looks like he can scuffle,” White said. “He’s quick and agile and he’s in shape. I’d love to see him go toe-to-toe with [former UFC heavyweight champion Brock] Lesnar, and we’re trying to arrange that. But until then, we feel confident Obama would prevail, so we’ve taken the belt back from Brock and sent it to the White House.”
Last April, despite the fact that Obama had never written an actual script, the Pulitzer committee awarded Obama the Pulitzer Prize for Drama, “in recognition of the extraordinary dramatic arc his life has taken.”
“So much for calling him “No-Drama Obama’!” joked senior White House adviser David Axelrod — a reference to the president’s unflappable leadership style.
Obama himself has made light of the many plaudits he has received, particularly his designation as People magazine’s Sexiest Man Alive. “I knew Michelle felt that way, but frankly I’m a little
surprised so many other people do. I’m very flattered. Now if you’ll excuse me, I have to get back to the gym,” the president quipped.
The White House does not keep a tally of the awards the president has received, says press secretary Robert Gibbs. But a running list is maintained at Obamafanzine.com, a Web site run by Kevin Dingle, who calls himself Obama’s “unofficial bi-blog-grapher.”
In addition to the Nobel, Fields, UFC, Pulitzer, and People honors, the president has taken first place in Season Eight of FOX’s “So You Think You Can Dance”; the blue ribbon in the Springfield, Ill., state fair woodcarving contest; and first place in the Saddle Bronc division of the annual New Holland-Saskatoon Stampede. He also has been named next year’s contestant in the Miss Universe pageant from Croatia, although many doubt whether he will actually compete.
Obama also has won four college wrestling championships, three Olympic gold medals (in 10-meter platform diving, luge, and dressage), the Fastest Trowel on the Block Competition from the Mason Contractors Association of America, and the Pillsbury Bake-Off.
The president — who holds the long-distance shooting record at the sniper school at Marine Corps Base Quantico, Va. — also has a chest full of military decorations. They include two Purple Hearts for service in Vietnam and the 1983 U.S. invasion of Grenada; a Silver Star for nighttime air combat missions over the Solomon Islands in World War II; and a Congressional Medal of Honor for conspicuous valor at Montbrehain, France, in 1918.

According to the citation: “Despite having his right arm and both legs blown off by a concussion grenade, Cpl. Obama secured his men in a dugout safe from withering machine-gun fire from a German emplacement, crept up to the German position from its flank, and dispatched the seven enemy soldiers there with his remaining bare hand.” The Medal of Honor was awarded posthumously even though Obama is still alive because, said an adjutant general in the Pentagon, “we all thought it was a lot more romantic that way.”
Sources in the Vatican say the conclave of electors is poised to name Obama the next pope.
“They’ve already made up their minds,” said a monsignor who requested anonymity. “They’re just waiting for the current one to die.”
A. Barton Hinkle is a columnist for The Richmond Times-Dispatch. He can be reached at [email protected]
Share