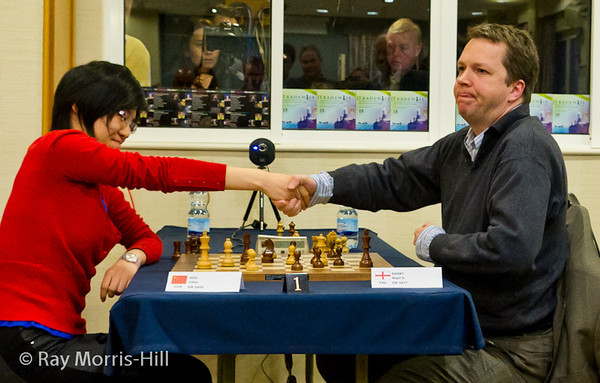 While it was no fairy-tale ending, at least we can say that the best man won!

English GM Nigel Short won the tie-break rapid games against teen sensation Hou Yifan to take the title of champion of Gibraltar 2012.  Congrats!  Not an easy achievement–as I am certain Nigel can attest to–especially when every single one of the spectators present in the room and hundreds of thousands of on-line followers wanted the Chinese star to win!  But experience does count for something, and rapid games are not the teenager’s specialty.
So another edition of the Rock’s famous tournament ends…no doubt many will speak of the success of the Chinese star for years to come.  This tournament marks the end of the reign of Judit Polgar as the top female in the world.  And , especially, it establishes Hou Yifan as a power to reckon with in the chess world.
Assuming FIDE operates with good sense and respects it’s own rules concerning the qualification process for the World Championship, then I would not be surprised if Yifan becomes the first woman to hold both the women’s and men’s world titles|  Let us wait and see…
SPRAGGETT  ON  CHESS
Share