Link
The following 2 examples are from the 2011 Max Euwe Memorial, that just finished today.  I like the way both games finished.  Pleasing, forceful play.  Especially for the spectators like us! 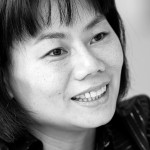 With this fine finish Peng won her group!  Congrats!

My friend and former-team mate Stuart Conquest  played some really enterprising chess (as usual!) as can be seen here.  Unfortunately, he lost his final 2 games ….
POSITION  AFTER  WHITE’S  24th MOVE (24.Bf2):
GM  Conquest

GM  Arakhamia
White has the B-pair but it is not worth anything here, especially with the White Knight off-side on h4.  Black’s position is fully developed and is ready to make a break-thru in the centre:
24…e4!   25.dxe4

26…Rxh4!
A brutal move!  See how the game finished in the pgn viewer below.