The Caro-Kann is not only one of the most respectable defences at Black’s disposal;  it is also one of the most solid, resourceful and difficult to beat openings on the market.  Little wonder why this defence is most often the choice when attacker meets defender at high-stakes chess.
That is why it is always nice to see a game (rare though it may be) where Black simply gets blown out of the water!  Witness the following brevity between GM Spassov and  National Master Debray (Elo 2350) at the recently concluded Cappelle tournament.

GM   SPASSOV
A popular line today that is characterized by both sides castling on opposite sides of the board.  In practice Black does very well!  Theory has not yet given its final word in this sharp position.  I myself have played it from both sides of the board with mixed results…Spassov’s plan is very interesting and worth a closer examination.

Not a new idea in this type of position, but never the less a strong attacking move that forces Black to play very carefully.  The idea is to use the g-pawn as a lever to force open a file on the Kingside.

There is a modern principle that an attack on the wing can best be met by a counter-attack in the centre.  Here Black threatens the a-pawn as well as …Qe4 (trying to trade Queens).  No doubt Black only considered Spassov defending his a-pawn, and not the cold blooded move that White now played:

The logical follow up of Black’s idea.  He threatens mate in one move and so puts White’s Kingside attack at a full stop for …one whole move!  Black’s misfortune is that his Queen alone is not able to do much damage on its own…
17.c3!

I really like this simple move.  White makes luft for his King and Black all of a sudden finds that he has nothing but a few useless spite checks!  Note that Black does not have 17…Ba3 here since after 18. Qb1! Black finds that he simply loses a piece!
17…Ng4  Risky is17…hxg5 18.Bxg5with h6 and Ne5  with a very strong attack  18.Rdg1 !

It is remarkable how White can simply ignore Black’s threats!  This demonstrates how ineffective an attack can be unless it is backed up by some reserves.  White, on the other hand, has 5 pieces dedicated to the attack (Queen, 2 Rooks, Bishop and Knight) and can afford to sacrifice one inorder to break thru…
18…Nxf2 19.Qe3 Nxh1 20.gxh6

Black’s spite checks have come to an end and now the time has come to solve real problems.
22…Qb5!? Hoping to get another check on f5… 23.Ne5!

Cutting the Queen off from the Kingside and intensifying the enslaught.  Black can not stop the attack.  If 23…Ba3 24.Bc1 solves nothing ; and if instead  23…Bf6 24.hxg7 Rfd8 25.Qh6  should be mate very quickly

23…g6  desperate, and with fingers crossed! 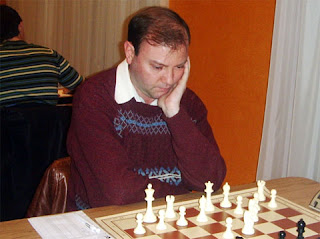