BOTH TEAMS AFTER THE EVENT

The first such match took place in 1911.  That was a long time ago (!).  Remember that Botvinnik was born in 1911 and that gives you an idea of how much the chess world has changed since then.  In anycase, even though chess is very popular in Russia there have only been 21 such matches inbetween.  Hopefully this tradition will be seen on a more regular schedule…

Each team had 10 boards and they would play each other twice.  On paper Moscow was a bit higher ranked, but in such rivalries this usually  counts for little.  Sure enough, after the first round the match was tied!  However, on the second day Moscow pulled ahead. 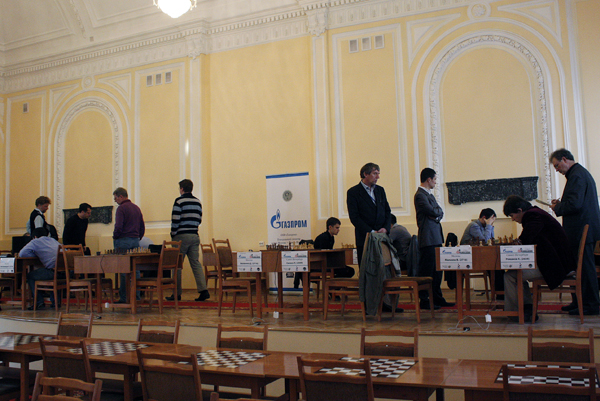 This year’s match took place at the elegant Chigorin Chess Club (St.Petersburg) between the 17th and 18th of September.  The sponsor was none other than Gazprom, which provided the $13,000 to the winning team.  The time control was 90 minutes for 40 moves followed by 30 minutes for the rest of the game.  (With, ofcourse, the traditional 30′ per move increment) 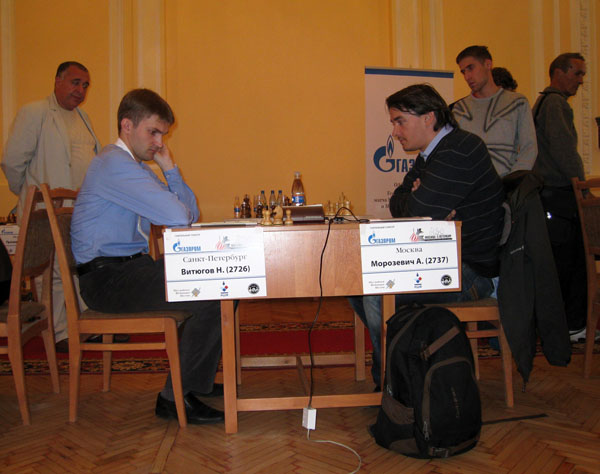 It was good to see Alexander Morozevich (above,right) return to the board, especially given his rather sheepish exit from the just completed World Cup.  In the first round he defeated Vitiugov in an extremely complex game that attracted a lot of spectators in the postmortem.
POSITION AFTER 24 MOVES:
GM  VITIUGOV

GM  MOROZEVICH
A messy and chaotic position typical of the Winawer 7.Qg4 variation.  Often in these lines it is too difficult to accurately evaluate who is better!  The important thing is for both players to try to keep their head above the water and to do their best to survive…

The material is equal, but the lack of harmony in Black’s position is a serious cause for concern!

Ofcourse the King can not retreat to f8 because of the check on e6, winning the Queen.  And treating to g8 allows the famous Philidor mate starting with Qe6-ch.  Therefore, Black has little choice but to move his King forward….
26… Kg6 27. Qe7! Qxc4 28. Ne6 Rg8

So far everything seems to be forced.  Even so, White can keep up the pressure with the simple and strong 29.g3, threatening to play a Knight check on f4:


INSTEAD, probably in time trouble, White simply lost a piece in one move!
29. Qxd7??  Bc8!
Not only is the piece gone, but the White initiative evaporates and Black has no difficulties in mopping up.  See the entire game in the pgn-viewer below

The entrance to the Chigorin Chess Club 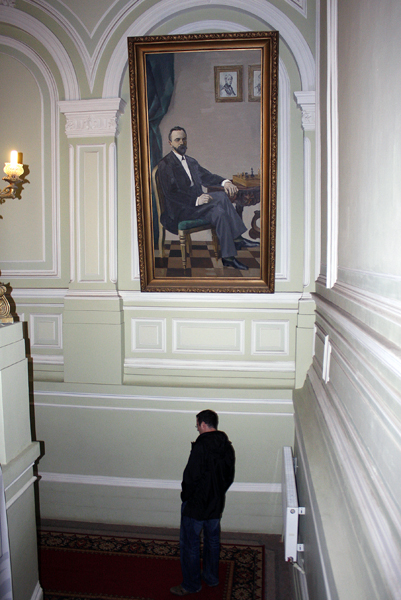 A portrait of Chigorin himself still haunts the club!  Many consider him the father of Russian chess 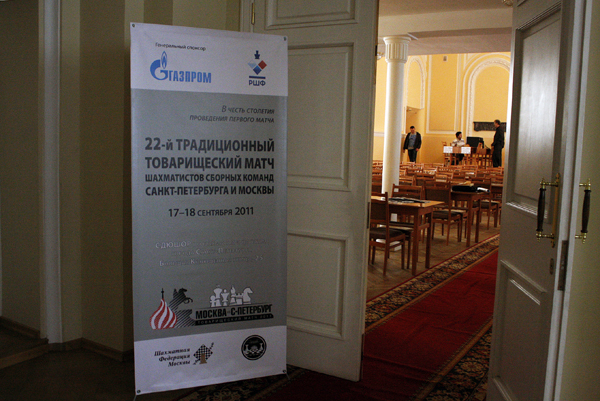 Do you have the courage to enter?

Khalifman (l) and Malakhov discuss where they buy their sweaters…

Waiting for the round to begin…. 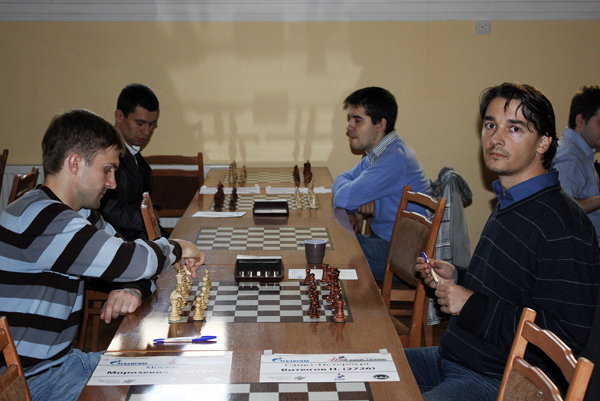 Morozevich lost the second round encounter with Vitiugov 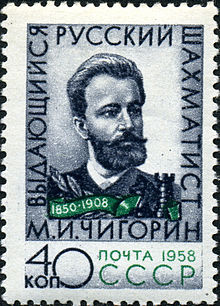