LINK
HIGHER LEAGUE CHESS CHAMPIONSHIP
The Higher League of the Russian Chess Championships for Men and Women took place in Taganrog 15th-26th June 2011. This acted as a qualifier for the full championships.  Alexander Morozevich finished on top with 8 points (from 11 games).  Timofeev and Galkin were , respectively, 2nd and 3rd.  All three qualify for the final, to be held sometime in November of this year. 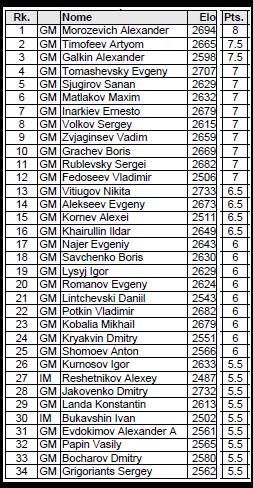 Alexander Morozevich , born on July 18, 1977, is always a favourite of the public.  Twice Russian Champion, many time member of the Russian National Team and winner of many international tournaments, Alexander has avoided competitive chess in recent times.  This tournament could mark his comeback.
While I might be biased, I consider tournaments such as this Russian League qualifier to be much more interesting than the so called ‘super-tournaments’ like the Kings tournament that just finished a few days ago.   Why?  I think that tournaments with less than 8 players produce less fighting chess and certainly much less theoretical novelities.  As a student of the game, I am more interested in chess ideas and in seeing pressure-filled games where everything is on the line, not relatively  relaxed exhibitions between ‘celebrity’ grandmasters.

The polish grandmaster Macieja brought up several other  distinctions between  official qualifying championships and ”show” tournaments in a recent article published at ChessDom.  Macieja argued that the Bilbao scoring system, for example, is less appropriate for qualifying championships.  He  pointed out that since the players have to pay their own way in these championships, this should be in itself enough incentive to play fighting chess. (In the show tournaments the players’ honorariums are often 10-times or more larger than first prize (!) and there is much less incentive to win the tournament) 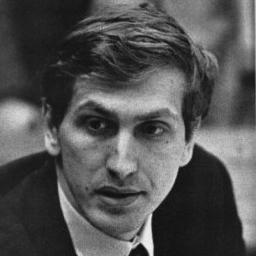 Be that as it may, I have always found the ‘mixed’ type of tournament–with 16 players or more (!)– that was the norm in the time of Bobby Fischer to be the most interesting form of tournament.  Usually only a handful of the world’s elite players are invited and they have to play in a tournament with a mixture of homegrown players ,those seeking IM and GM titles and 2nd-tier grandmasters  Curiously, it was always more interesting  to me  how Fischer would do against the lower half of the tournament –Fischer often scored worse against them than those more famous names at the top!
In anycase, today the chess world is very different from the time of Bobby Fischer.  Open tournaments represent 99% of all chess competitions. The GM title is no longer what distinguishes one player from another: today the ELO is god, regardless of its questionable impact on the game. And most of the world’s most prestigious ”closed” tournaments are infact little more than private parties with private sponsors: they have become exhibition events amongst chess ”celebrities”.
Somewhere along the path to get to where we are today even the prestige associated with the title of World Champion has been lessened.  Should we really be so surprised that sponsors have been disappearing at an alarming rate?
____________________________________________________________
AND NOW FOR SOME CHESS!

It was a tough tournament and unclear up until the very end.  Morozevich had to defeat the tournament leader Sjugirov (born 1993) in the 9th round to slide into pole position with 2 rounds to go.
The game was a typical fight in this kind of tense situation  Parts of the game remind me of the final game between Kasparov and Karpov  (Sevilla 1987) where Kasparov had to win or he would lose his world title-a draw being insufficient.  Kasparov opened 1.Nf3 and played a slow moving Reti, getting nothing from the opening, but producing a tense and extraordinarily rich middlegame with chances for both sides.
POSITION AFTER 17 MOVES:
GM  SJUGIROV

It looks as though Morozevich has bitten off more than he can chew and his Bishop is in trouble.  Did he overlook something?  White played the fantastic 25.b4!? (threatening b5) and it becomes clear very soon that it is just a wild, wild position!
In this type of fight it does not matter if one side is a bit better or a bit worse: what matters is the momentum of the struggle for the initiative.  Top class players , when both are fighting for the win, focus more on their ability to create concrete threats  than on who has an extra pawn or some positional advantage.  Only too aware that more is at stake than just the game point, both sides generally use all of their time and this only increases the tension and the likelyhood of one side taking the wrong turn…
Which is what happened at a later point: just when Sjugirov had stablized Morozevich’s initiative, he then threw in …f5?! (weakening his Kingside) in an effort to take the initiative himself.  Soon Black’s position started to look suspect:
POSITION AFTER 37 MOVES:

Here White can get a clear advantage with 38.Rxd5! and after 38…Rxd5 39.Qxd5 Rfd8 40.gxf4 followed by Ne5 on the next move or soon after.  INSTEAD, Morozevich sacrifced the exchange on c4, getting only a small edge and giving Black a reasonable chance to hold the game.  Probably both players were already short of time and the next phase of the game appears to be rather chaotic.
EVENTUALLY, Morozevich found himself in a very favourable ending after 66 moves:

Is this ending a win with perfect play?  The table bases tell us that without the presence of the h-pawn , White wins, though it is not easy.  In anycase, it is probably all moot: with 30-second increments Black was not able to put up much resistance and lost quickly in another 12 moves!
A GREAT FIGHT!

GM Alekseev  fully deserved his mediocre placing in the tournament, and even though he is  one of the best players in Russia he had problems winning games.  However, at age 25 he is certainly with a promising future!
This game is very curious.  It turns out that Black had no idea of what he was doing earlier (not meant as an insult to him, ofcourse,but  a reflection on what happened next!)  and I am not sure what Black was expecting White to play in the diagram above.  Should White exchange Queens then Black would probably have the advantage in the ending!

INSTEAD,  Alekseev played the shocking (though very logical) 23.Bf3!  And Black, after realizing that he will lose a pawn with a much worse position (little stops the White Rook from infiltrating on the c-line), resigned!  Bravo!  Great for the spectators!

Potkin did not show in this tournament the great form that he demonstrated when he won the European Championship earlier this spring in France.  Here he must have been lead into feeling very secure and safe (always a dubious quality for us chess players)  and he makes a move that seems to be alright , but infact is a mistake that allows Alekseev to punish him in just a few short moves.
17…e3!!  (interference sacrifice)  18.Bxe3 Bxh3! 19.Bf1

No doubt Potkin thought that he had things under control….

This super-sharp line used to be a serious theoretical thorn in the foot for the White pieces.  For decades the mainline started with 7.d4!? b5! 8.Bb3 Nxd4 9.hxg4 with unfathomable complications.  Even correspondence players had difficulty handling this variation!  Nobody could find a trace of an advantage for White, despite a material advantage in many of the lines…. 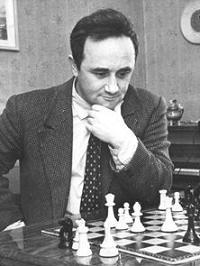 E.Geller (1925-1998) was perhaps the most important opening theoretician of the past 50 years.

Then Geller started to play a line that the theoreticians up to that point had dismissed as harmless and now this line has caused the Black players to think twice before playing this opening!
7.Bxc6-ch!  bxc6 8.d4!

Now White is threatening to take off the Bishop.  Various attempts have been made to try to reinforce the attacking chances, but they have failed miserably up to now.  So Black usually just takes the Knight and tries to content himself with an extra pawn.
8…Bxf3 9.QxB  PxP 10. Rd1(10.Re1!?) 10…Qf6!? 11.Qb3!?

The threat of infiltrating on b7 poses serious problems for the Black pieces.  In practice Black scores horribly.  In this game Kosintseva gives a very painful lesson to her opponent!

GM  VOLKOV
It had been an interesting game until both players became short of time and then  things began to happen, not necessary for the correct reasons!  Soon White was completely winning , but with  a totally wild position  that offered Black some practical chances.
I love games with promoting pawns!  They lead to such amazing tactics, as here.  White is (for the moment) up a Queen but Black’s c-pawn is very powerful and threatening.  Wrong would be now 40.Qf1 because after 40…Ne2-ch! Black would escape, as the reader can easily verify for himself.
However, White has 2 winning moves: 40.Qa1 and 40.Qg8-ch.  The first was more precise, but with the clock ticking the check was more evident:
40.Qg8-ch  Kh8

The strongest move.  The Queen can not be taken because of the intermediate check on e3.
41…Kg6!

While no longer a popular line for Black, Kobalia is a specialist in this exact variation and has scored many impressive wins.  I recommend the reader to take a look at his games, to get an idea of his understanding of this line.
What is impressive about this game is how the 18-year old GM from Kalmykia (Kirsan’s home) completely outplays his more experienced rival and soon puts him in a near paralyzed position:

White is  completely dominating the board.  His control of the d-line must be decisive.  It is worth playing over this game several times to admire White’s powerful play.