Morozevich shares lead with 1 round to go!

Morozevich won a powerful game yesterday against Hungary’s Peter Leko, putting him at 6 points (share of the lead with Mamedyarov).  With one round left in this great tournament, things are far from clear, however.  Not less than 5 players are half point behind!  Today Morozevich will play against Svidler, while Mamedyarov plays Wang. 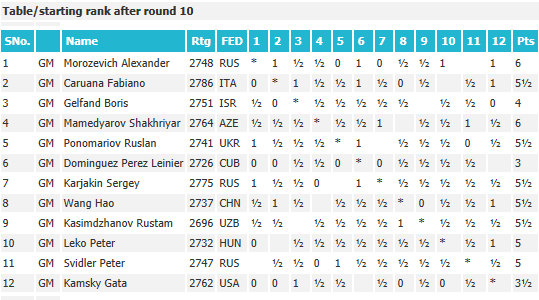 gm  MOROZEVICH
Once more Morozevich played a theoretically disregarded opening line in the English, deferring the struggle until the middlegame.  It worked very well, as Leko dropped his guard and castled a bit too early, allowing White to build up a Sicilian-type attack on the Kingside, but without Black having the usual active counterplay on the Queenside.
In the position above, Leko’s last move must be seen as a sort of desperate counter-action, trying to deflect Morozevich.  However, it did little good as the Russian just ignored the Queenside:
23. e5! dxe5 24. Be4!

The threat is just f6 breaking up the Kingside pawns
25…f6  There is nothing better  26. Bxh6!

Not very difficult to calculate, but thoroughly devastating!
Leko resigned at move 42, but he could have resigned much earlier…