The film stars  Hala Alyan and Mounia Akl. ‘I Say Dust’ tells the story of Hal, an Arab-American poet belonging to the Palestinian diaspora in New York City, who meets Moun, a free-spirited chess sales girl. Over a chess game, the two challenge each other’s idea of what is ‘home’.

In the words of Darine herself: “(The film) is basically about identity in diaspora and how you reformulate your idea of your own identity. You become a different person. That’s what the film is about. The two main characters represent the two ends of the spectrum: one was able to break the boundaries of identity and what it means to have a home while the other character is still restricted within those boundaries.”

The film officially aired in September and has since won a number of prestigeous awards at film festivals all around the world. Infact, ‘I say dust’ continues to enter festivals, for example the film will be shown in Los Angeles later this month. 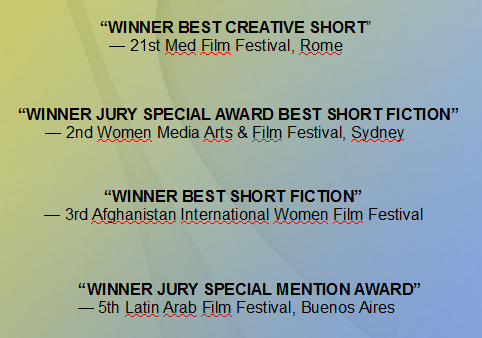 And more recently, and this is disturbing, even though the film was shown in the ultra-conservative Afghanistan, it was banned in recently held film festivals in Lebanon and Egypt, creating considerable controversy in the media.

But more on this later, when I present a photo-gallery of items related to ‘I say dust’ and the film’s  recent banning.

What I want to share with the readers is that I received earlier today a very nice email from Darine Hotait where she refers to my August 26 blog entry on her film. In particular, she kindly corrected me about a comment I made about the board not being set up correctly in a publicity photo (but not the film where the board is perfectly set up!) 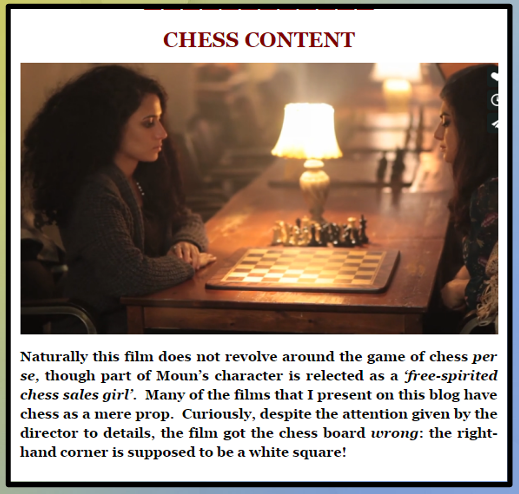 Most of my readers will by now have noticed how I have this (bad) habit of rarely letting an opportunity pass to comment on whether the board is set up correctly. (There are dozens of examples on the pages of this blog!)

But I am truly GRATEFUL to Darine–a chess player herself– for taking the time to explain why in the above photo the board is not set up correctly:

“I just want to correct one fact. The picture where you show the girls sitting in front of the chess board is from the making of and not from the film. In the film, Moun gives Hal a chess lesson. Before they start playing she turns the board from the position you see in this photo to the correct position you mention…I am not an expert chess player but i’ve played for quite some time to know that one basic thing.”

Darine then provides with a gif to show the board being turned around correcty immediately before the camera started to film:

WOW!  That makes my day!  Thankyou, Darine, for taking the tme to write to me. I am so pleased!!  (And I have corrrected my earlier blog article)

Here are two youtube videos that my readers will no doubt find informative.  The first is Darine being interviewed about her work (the beginning is not english, but most of it is, especially when Darine speaks)  And the second is a wonderful talk that Darine gave last year, explaining many of her thoughts on the world today.

FINALLY, to finish, I want to present a photo collage of recent items about Darine’s film ‘I say dust’, as well as news items about the film’s banning, as well as a few other items related to these subjects.

Darine moved to America when she was a young girl in 1994.